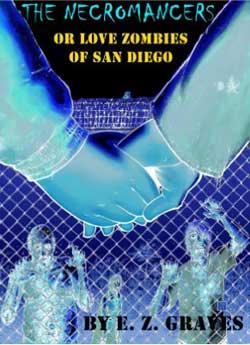 The Necromancers, or Love Zombies Of San Diego
by Jim Musgrave

YA, or Young Adult novels have always been a controversial term to me as a reader. Now, don’t get me wrong, I can and typically do enjoy some of the market’s contributions, unlike some of the more pretentious literary critics out there, (I actually have a sweet tooth for books of this variety.) but the very definition of what makes a young adult is very broad to me. Perhaps this is because after the few short years I first began reading books such as Captain Underpants and Goosebumps I jumped immediately into mature Horror territory (I first read IT when I was nine years old; sure I only made it about halfway through the novel, but I find my effort to have been admirable, if I may so myself!), completely skipping over the Young Adult reading period. Now that I’m years older and books wiser, I can trace back to novels such as L. Frank Baum’s The Wonderful Wizard Of Oz, or Lewis Caroll’s Alice’s Adventures In Wonderland and Through The Looking Glass as a few of my favourite books that I’ve read within the past year, and I recently participated in the YSU Reading Festival which required reading works by Young Adult authors such as Laurie Halse Anderson and Rebecca Barnhouse.

The fresh cadaver lying before us, James R. Musgrave’s The Necromancers, or Love Zombies of San Diego found its place wedged uncomfortably between these two reading levels. I couldn’t put my finger exactly on what it was that kept begging for my attention about the novel until I was about 20 pages into its story that I realized that the book has the ambition of a young adult book ripe with historical allusions and scientific statistics, but recited in the tone one would speak to a much younger audience. The term “Young Adult Zombie Novella” is quite an oxymoron to begin with, as it is hard to imagine the likes of a rotting carcass limping towards the young adult market or its readership. Recent literary trends such as the success behind Twilight and The Hunger Games can prove that the Young Adult market can handle some elements of traditional Horror (as bad as they may be butchered, in the case of Twilight) and violence (in the latter case), but zombies seem to be a different breed entirely. You may invite a vampire to dinner and dress him up as the most charming, exuberant guest at the table, or neuter the archetypal and frightful werewolf into a more presentable, tamed beast, but zombies? Now that’s a challenge for an author!

The title, The Necromancers, or Love Zombies of San Diego is perhaps the simplest definition of the novel’s protagonists. The Necromancers are a circle of teenage zombies with the capability to effectively communicate and to love, as well as rich mercenaries of the same young age who share the passion of zombie hunting. One can find parallels between the Love Zombies and the love movement of the 1970’s. Each character has his or her signature weapon, adorned with their own aptly-chosen nicknames, and preferred method of mowing down the undead hordes. Whereas the living undead choose to use more intimate weaponry such as blades, the kids born of wealth tote Uzi sub-machine guns and other forms of artillery. Perhaps the most “Young Adult” aspect of this novella is that of the characters and their defining qualities or variation in weapon choice; some concepts found in the text could have been lifted (with Silly Putty, of course) from the pages of a Japanese manga book or a highly specified Call of Duty Nazi Zombies game. The main conflict of the novel arrives on a gooey platter when upon finding the source of the undead, the narrator must lead his motley crew on a journey to stake the zombie hordes in their collective heart (that is what you do to zombies, right?).

The first thing that pricked my ears during the prologue (which takes place ironically during the “Los Dias de los Muertos”, or, “The Day of the Dead”) was that Musgrave utilizes the Tell, Don’t Show method of writing, a quality of his storytelling that persists throughout the novella’s short length. One character, for instance, is introduced as being a “smart ass” before he even opens his mouth; other adults are described as sarcastic or wise-crackers (by the definition of witty humor rather than weathered, knowledgeable white men). Now, perhaps this is just a lesson taught at the school of literature I attended (Miskatonic University), and a subjective one at that, but unless used properly I have found that this can be very counterproductive towards the effect the author is going for. Rather than letting the characters’ motivations and nature shine through their actions, this method directly tells the audience “This character is whacky,” or “This guy is a kind-hearted man” rather than having the confidence to let the story speak for itself. There are few moments in Love Zombies of San Francisco that really give the characters or the plot they serve time to breathe, which is a darn shame because there are quite a few novel approaches to the genre and archetypes that could really have been the book’s highlights, but were instead footnotes to the story’s brisk pace. Although, it isn’t unlikely that this could have been the author’s intention in order to conveniently convey how the characters rarely have those moments to stop and smell the painted-red roses, and when they do (a moment roughly halfway through the novella’s length between the main character and his undead lover) they are short-lived. Given another fifty pages or so, I think that there were some very good qualities about the story that could have been expanded upon much to the tale’s benefit.

One such charm that the book holds is that Musgrave actually took the effort to take the zombie’s origins in an unexpected direction, aside from the titular hippie Love Zombies. Without giving too much away, one can say that Musgrave took a very Aliens-esque approach to the classic zombie depictions (and that is definitely a double-entendre). One can also find it quite clear that he took the time to study his topic in order to make this chance well worth taking and more than just a wasted opportunity in originality. The attention to scientific detail without reading like a textbook is one of Musgrave’s greatest strengths as a writer, and one that will surely become a trademark that his readers can look forward to finding in his future works.

In summation, The Necromancers, or Love Zombies of San Diego is a Young Adult novel with a slight identity crisis, but even through that dam moments of clarity seep through in what I imagine to be a moment of clarity for both the reader and writer alike that show the novella’s true intention. One can tell Musgrave is a true fan of the genre, and a child playing with army men and toy cars at heart (regardless if the private’s face is dripping off, his uncaged tongue whipping around as he looks for the living, breathing prey and the plastic Matchbox car he once drove overturned and burning an anarchic blaze). To bring this one-sided palaver full circle, Love Zombies of San Francisco may not be a book to read to your five year old once his/her enchantment with Winnie the Pooh has dispelled, but your ten year old might find it to be an enjoyable, quick read as well as an unique introduction to the zombie mythologies.