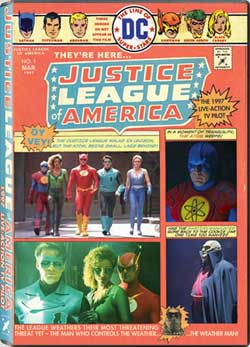 An evil Weather Man intent on destroying New Metro City with a series of malevolent meteorological mishaps? Can the super-powered (and semi-employed) Justice League of America save the day? Or will New Metro be drowned in a humongous tidal wave?

The early days of super hero films are nothing like they are today. FX were not up to par, budgets were not high enough to warrant extravagant digital work and most of our past hero films were steps up from TV series releases such as Isis and Shazam (Captain Marvel). To bring things up to speed Superman the movie came out in 1978. Batman arrived in 1989. So essentially were are talking about what was around 10 years later. “Justice League of America” was a TV pilot deemed unsuccessful under the wing of CBS. The team is actually a dream realization for DC comic fans, but the delivery and production aspect was not. Those who follow the comics know that most of the key members were missing from this debut. “Batman”, “Superman”, “Wonder Woman”, “Hawk Man” and “Aquaman” were no where to be found. 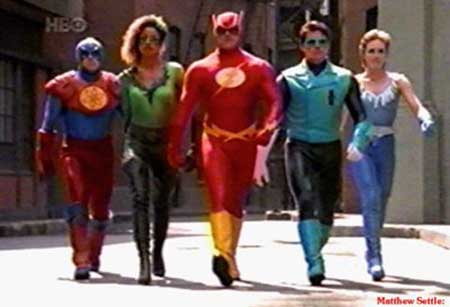 In this debut we get the 2 mainstays “Green Lantern” and “Flash” added to the somewhat new (or invented) characters of Ice” and “Fire”. 2 characters which are considered lesser-known but have made appearances in the comic realm are the “Martian Man Hunter” (leader of the JLA) and “the Atom”.

In short, it’s not the JLA we grew up on, but still interesting enough for the time to want to know more. This pilot had full intentions of spanning the series as it introduces the new character “Ice” in its TV movie debut. The debut would be go one to be called silly, sporting bad costumes and story holes across the board. I’ll have to agree as even upon this new review my 9 year old called it “stupid”.

The film represents a need that we could see done properly with the success of “X-men” and “The Avengers“. I think the biggest issue would ly into getting its top characters (which are franchises now) signed on for an ensemble. It’s likely that “that” will never happen and that players like Christian Bale and (Green Lantern) Ryan Reynolds will never agree to a combo film….but we can only hope. 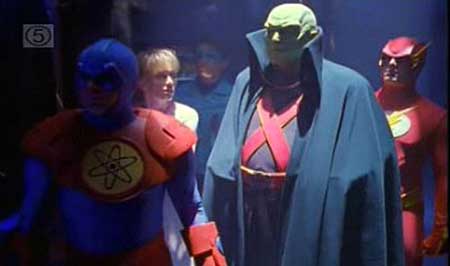 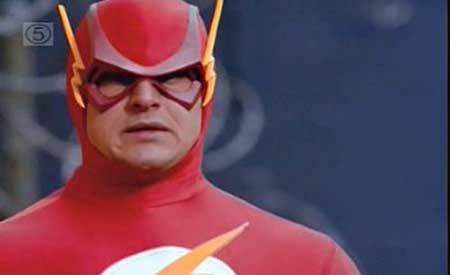 In getting to the story, it begins in a rather “now” kind of way with the heroes being interviewed like a VH1-style documentary. As they talk about the present and past we begin into the story about the super heroes and their latest threat, the “Weatherman”.

Tori Olafsdotter (Kimberly Oja) works for the Eno Meteorological Institute of whom with her coworkers hopes for great new things in the field of weather discovery. To cut to the chase she later bumps into an “experimental device” giving her the powers of freezing things (deemed “Ice”)

This debut entry centers on the threat of the Weatherman” and getting Tori to enlist into the JLA team. Tori is also trying to impress her boss Dr. Eno so that she can head up the research department.

Meanwhile, the JLA as civilians are dealing with life like everyone else. “Flash” as Barry Allen (Kenny Johnston) needs a job, B.B. DaCosta “Fire” (Kenny Johnston) is a struggling actress, Ray Palmer “The Atom” (John Kassir) is working as a science teacher while Guy Gardner “Green Lantern” (Matthew Settle) is out slinging software per his salesman gig. The JLA are all pretty much dealing with life, relationships, friendships and employment while fighting crime when needed (summoned per J’onn J’onzz/Martian Manhunter) 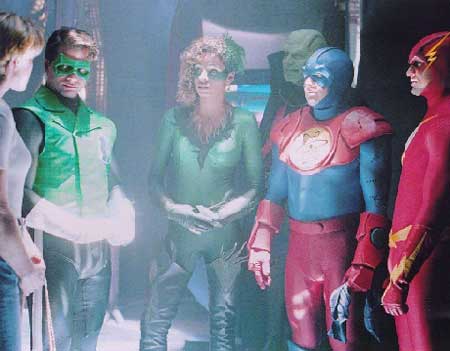 J’onn J’onzz works out of underwater spacecraft base, where the JLA team meets. At current, a terrorist calling himself the “Weatherman” is causing chaos to the city (being referred to as the “New Metro”). The JLA are hot on the trail of putting out Weatherman’s damages while trying to determine his real identity. This is of course in between interrupting their personal lives with hero duties.

The movie never reaches the level of excitement we look for in other hero films mostly due to bad effects and that the JLA comes across more as a team from “Friends” than dark and troubled. It would be years later that we were given the series “Heroes” which despite being an original concept was far better presented than this dud. I’m still a tradionalist that looks to the early attempts as “special” (how bout Electra Woman and Dyna Girl! – haha) even though perhaps the timing was not right. The film is hard to come by and these days only really available per bootlegs or you-tube watching. I won’t recommend it, but will suggest digging into the he past to see how far we have come.