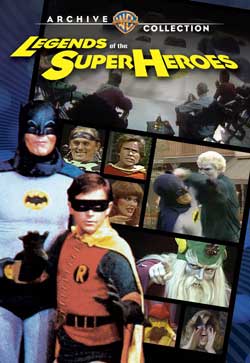 Heroes and villains of DC Comics square off in the two-part, live-action, made-for-TV (with a laugh track!) smackdowns of Legends of the Super Heroes. The Challenge: Batman and Robin (Adam West and Burt Ward of the live-action Batman TV series) lead The Flash, Green Lantern and more JLA members against The Riddler (Frank Gorshin reprising his TV role), Mordru, Weather Wizard and other Doom-dealers. The Legion’s ultimate gambit: trick the heroes into downing a diabolical depowering drink! The Roast: Poking fun beats swapping punches when celebrity host Ed McMahon emcees a rowdy rave-up. Who knew DC Super Heroes and villains packed as much verbal wit as physical grit when not locked in mortal combat? These Legends will leave you laughing.

There’s a good reason you’ve probably never heard of this movie/2part-TVspecial series? There is also a good reason why you “should” (if at least) for comparison nostalgia. I can honestly say, I caught this upon debut in 1979 and anticipated with full excitement. Why? because back then it was uncommon to see your comic book heroes presented on the screen (big or small). I was able to obtain a long lost copy for the purpose of this review, though you can actually purchase this now from this link. 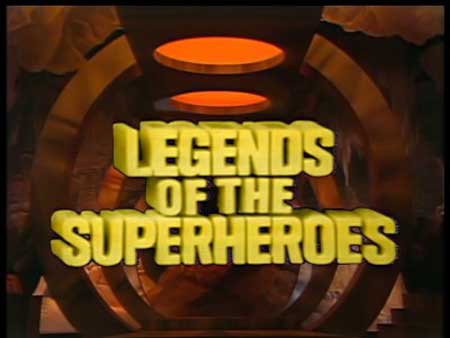 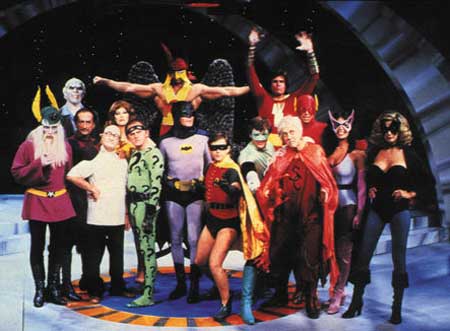 The funny thing is, is that while you can grab a copy now, you couldn’t for over 30 years (unless you count bootlegged TV to VHS copies). Now before you run out and spend your good money, you should know it’s 100% cheese. No really,…it’s really bad cheesy early Batman kind of stuff. In fact it actually has actors Adam West and Burt Ward reprising their classic suits and roles for a authentic “Batman and Robin” appearance. And if that isn’t enough you have actor Frank Gorshin replaying “his” role as “The Riddler”. Nice! 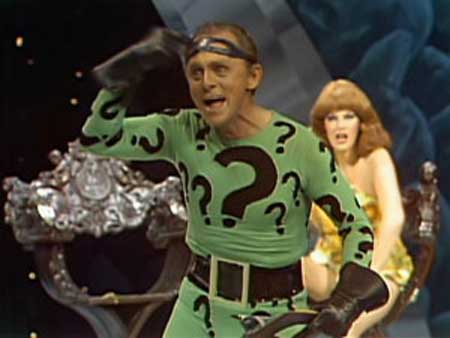 So what is this and why should you care? The “Legends of the Superheroes” is not really a movie. It is the title for these 2 one hour TV specials under the Hanna–Barbera team known for their children’s TV show work. The show is off beat and is somewhat based the “Super Friends” cartoon series. Though this is live action in full embarrassingly awkward fitting leotards and costume capes in the effort to present a few of the DC universe greats to its viewing audience. 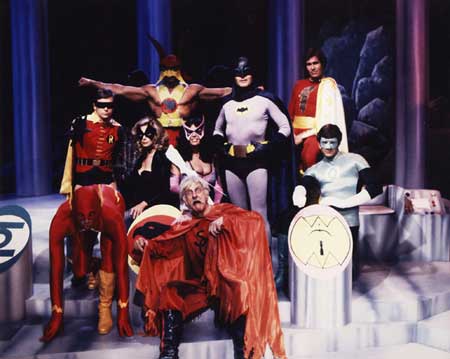 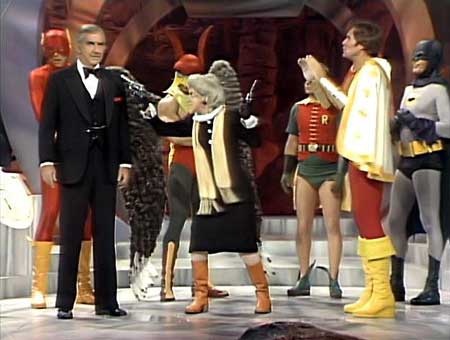 The lineup goes like this: “Batman”, “Robin”, “Captain Marvel”, “Hawk Man”, “Green Lantern”, “The Huntress”, “The Flash”, “The Atom” and “Black Canary”. This would “not” complete the needed lineup for the Justice League players but it was all that was authorized for this show. The “Hawk Man” was the coolest of this group AND the most embarrassing for that matter (as he often answers with a loud hawk scream – makes you wonder if Ace Frehley was inspired for his performance in “”Kiss Meets the Phantom”). Well at least he made his outfit look decent. 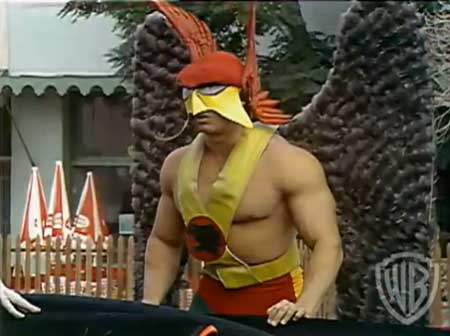 “Legends of the Superheroes” contains that “way over-used laugh track” backing we’ve come to love and hate. It also started its first episode with a “Roast”, of all things. The players are seated while villains and associates arrive to crack bad jokes and cheesy one-liners. If that doesn’t get you then how bout Ed McMahon playing the host? A few of them like the “Weatherman” even go as far as to indulge their talents against the heroes prompting much laugher from their fake voiceover audience. The show begins with a glorious character by character introduction that announces each super hero before they get rolling. Once seated the jokes start pouring in!!

The 2nd special was presented more as a challenge of the heroes vs the villains. The “Legion of Doom” announce that they have planted a bomb of which the “Justice League of America” must follow clues to disengage. It’s good to see them out of their chairs, but there’s not much “killer” action to make you want much more (My 9 year fell asleep to this as I introduced this worn out old TV cheese classic…I was not far behind) 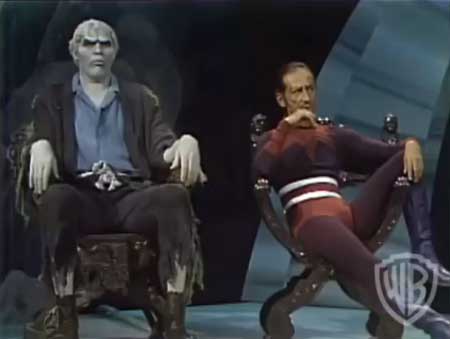 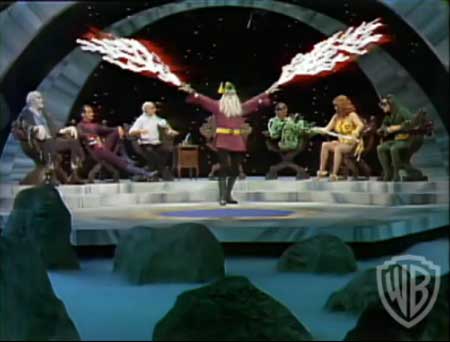 Now, for me, it wasn’t so much the super heroes that caught my attention in 1979 as it was the announcement of a group of super villains making appearance. In fact they called themselves the “Legion of Doom (featuring Sinestro, Riddler, Weather Wizard, Mordru, Solomon Grundy, and Dr. Sivana). This super villain showcase was something we hadn’t had in TV hero shows which at most might only feature 1 or 2 villains. They, like the superheroes, also gathered around in an open round table format as if they were being interviewed for the Tonight Show”

FX work is reminiscent of what you’d expect from “Hanna Barbera” and TV for that time. Lots of silly laser beams shooting across the screen, quick cut edits, and folks flying off the screen using a green screen and the enlargement control (“Shazam!”) 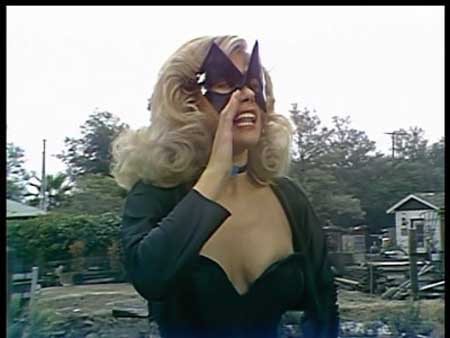 The show was a quick follow up that ultimately used its promotions as the live action version to the cartoon series “Challenge of the Super Friends” (the animated series.) In any case, whatever the end means were for the time, it would never thrill enough to warrant a continuation. The show was pulled and ignored as fast as it was introduced. It would be many years later that we could take our heroes more seriously in the comforts of Hollywood magic. “Legends of the Super heroes” is what I’d call a cult offering that never gained enough cult attention to warrant talking about. Though in this age of resurrecting our heroes, I had to give it small shout out. Check out the pictures as that should give you plenty of idea ;) 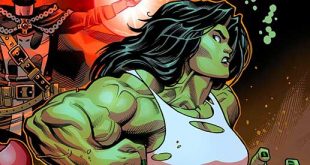 Superhero Movies that Need to Hit the Big Screen