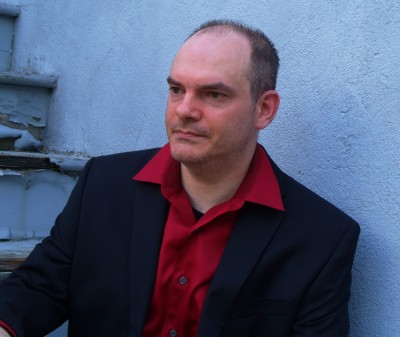 Hi Adam, thanks for agreeing to do the interview. How would you describe your writing?

I bring a dark and cynical perspective to my work. Whether I’m writing about a superhuman fetus, a spoiled society chick/cokehead or a two-bit hoodlum in love with a mob boss’s daughter, there’s always a piece of my own personal worldview in my work.

What is the history of Superfetus? How did it go from a short story to a novella?

Super Fetus was originally a short I read at the gross out contest at the 2003 World Horror Convention in Chicago. Just a two minute jaunt about a fetus who was pissed off at his mom for trying to abort him. Anyone who’s been to one of those knows how tough that crowd can be, but the piece got a great reaction. I knew I wanted to do something more with it. I wrote it into a novella but only showed it to two presses. Delirium and Eraserhead. Both really cool small presses who had expressed support for my work, but they both initially passed, so I trunked it. Where else was I gonna go with a story about a fetus dodging scalpels and coat hangers? Several years later I bumped into Carlton Mellick of Eraserhead and he asked, “So, what happened to Super Fetus?” When I told him nothing, he said, “Let’s do it.” So we went through a bunch of revisions and came away with the version as published.

I’ve worked with several small presses over the years and I’ve enjoyed each one. Eraserhead was great, and I’d happily work with them again if the right project came along. But I feel like there is a ceiling to the small presses, and they arent any easier to land a deal with than the big presses. You still have to find a project that appeals to them and work within their framework. With self publishing, I’m doing everything my way. I’m putting out the stories I’m passionate about to connect with a loyal audience that appreciates what I do. If I fail, I’ll go to the grave knowing I put myself out there rather than conforming to someone else’s editorial and creative vision. As far as electronic formats, that’s been such a boon to self publishing. You can produce a professional product cheaply and distribute it worldwide, right alongside the biggest publishers in the world. That’s never been possible until recently and it truly is revolutionary. 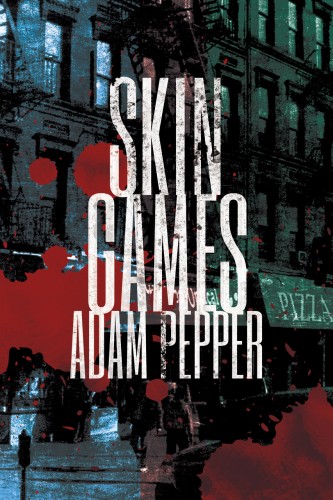 For your next work will you self-publish again or look for a publisher?

I have just self published a brutal crime drama, SKIN GAMES, and plan to continue self publishing for the foreseeable future. I spent over a decade pursuing a traditional deal. I had two agents and came close a few times, but I never sold to a big press. Right now I’m very content on my own. I wouldn’t rule anything out if someone approached me with an offer, but I’m not looking either. Rather than chasing a dream and hoping someone on the inside gives me a big break, I’m building my own audience so I’ll be someone the industry covets.

Your latest book, Symphony of Blood, is a tale of a detective involved in a supernatural murder mystery involving a monster. You’ve developed an interesting character with Hank Mondale. I assume you have sequels planned?

I am working on the second Hank Mondale book and should have it available later in 2012.

Why did you have some of the book from the monster’s point of view? We’ve talked about this, and the different schools of thought on switching points of view in a story, and the conventional method is not to do this, even though many great works like Faulkner’s Sound and the Fury, not too mention dozens of novels by the best selling horror author of all time, Steven King- depend on switching the POV- were you worried you would get criticism for departing with this convention?

The detective portion of the novel is very familiar and somewhat formulaic. I wanted to take risks in the narrative to make the work stand out. The monster POV gets a lot of reaction. Not all favorable, but it seems to leave an impression on the reader, which to me, is what it’s all about. You’ll never please every reader but if you can make them remember you, you’ve done okay. And the people who like and appreciate what I do seem to really enjoy the monster portion of the book.

Do you affiliate with any one genre in particular? Superfetus is bizarro and SOB is supernatural crime/ detective fiction, and both have horror and humor elements. I’m interviewing you for a horror site because I think your writing is very dark and appeals to horror readers, but clearly also you write in different genres.

I don’t consider myself strictly a horror author but that’s where my fan base has drawn from, perhaps because most horror lovers are open minded to anything dark in theme and scope. I’ve always been attracted to bleak and gritty plots filled with disenchanted and alienated characters. I’m a fan of the underdog, of the underestimated and the underappreciated. I don’t write in one genre, per se, but I think there is a consistent voice and tone to everything I do.

What do you have planned for the future?

Flying by the seat of my pants…but definitely the next Hank Mondale book.

Self-publishing is very new and on the cutting edge, as is electronic publishing, can you describe the process?

Writing a novel is writing a novel. The process is the same. Write. Revise. Edit. Get art. Format. The only difference is who’s in control of the process and which direction the money moves.

What are some good gory movies you’ve seen recently?

I’m so behind…I’m the wrong guy to ask. I have the Human Centipede cued up on Netflix and still haven’t gotten around to it.

You are definitely politically incorrect, and you’ve written some really disgusting descriptions. Do you worry about offending people? Do you try to offend people? Has your work offended people? Even I was offended by parts of Superfetus, which is a compliment.

Super Fetus was intentionally inflammatory. There’s no denying that, but I felt it achieved its intent of entertaining and provoking thought simultaneously. Generally, I don’t set out to offend with my work, but I don’t shy away from it either. I just want to be unabashed, unapologetic, unbridled and maybe a few other ‘uns!’

Who are some writers you like or who influenced you?

In 1994 I read two books in succession, Clive Barker’s Imajica and The Last Exit to Brooklyn by Hubert Selby, Jr. I had this crazy epiphany: I was going to take the creative brilliance of Barker and combine it with the raw power of Selby! Ambitious yet foolhardy…as I had no idea what I was doing. But I’ve been striving towards that ever since. I’ve also been influenced by Vonnegut, Palahniuk, Cormac McCarthy, Andrew Vachss and so many more.

What is the key to writing a scary and suspenseful scene- (there are many in SOB)?

Thanks! The key to suspense is writing a compelling story. Suspense is all in the reader’s desire to keep turning pages. To break it down to one scene, what I try to do is not waste any words but be as cinematic as possible.

What is SOB about?

Symphony of Blood is the story of a hard-up PI whose plush case of protecting a rich spoiled brat escalates into an encounter with a man-eating monster.

SOB seems to imply that the wealthy can afford to commit and get away with crime (unless there is a monster involved, which f*cks everything up), is that a statement you were trying to make?

I think many of the characters in Symphony are flawed. The wealthy ones included. I suppose it is fair to observe that their wealth does allow them to indulge in their own flaws whereas some of the poor and downtrodden characters never have much of a chance.

Thanks Adam! Any last words?

Thanks for having me, David. I really appreciate the interest and support!