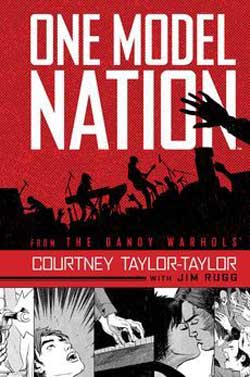 “From US rock band The Dandy Warhols’ frontman Courtney Taylor-Taylor comes an original graphic novel illustrated by indie super star Jim Rugg. A work of historical fiction set in Germany in 1977, it follows four young men who were to become the voice of their generation. This is the epic journey of art noise band One Model Nation, the final dark days of the Baader-Meinhof Gang, and the band’s mysterious disappearance only months later. Features a host of bonus extras: sketches, director’s commentary, deleted scenes and more.”

Dying Breath: 4.5 out of 5
If you want to talk about removing oneself from their comfort zone, than you can look no further than me taking a look at One Model Nation. Typically, I review horror books, this is not one of them. I am a Metal Head, this book is not about that genre of music. So why on Earth would I even take a peak at
this new OGN book from Titan Books and love it like I did?

Easiest way to start is to admit, I am not a big fan of the character designs here. While the style did not appeal to me personally, it did do something very right, which was fit the tone of the book. Rugg’s artwork does more than set the scenes, it captures a tone that I can only compare to something you would get from a movie soundtrack. High moments are depicted in colors to reflect the scene, while the down moments hit lower tones on the color scale. Visually this book is on point from start to finish.

The story though is the real winner. The sense of history, even though the band is fictional, places the reader (in this case an American reader) into a world that they might not be familiar with. I don’t know much about the music scene in Germany, but after reading this I get a feeling of what it might have been like. Taylor-Taylor crafts some fantastic dialogue that moves the story forward as it covers music and politics at a time where a movement was needed.

The more I find myself recalling this book, the more I see it playing out as a movie. I can’t say who this book would directly appeal to, but I think that anyone with any kind of interest in music and comics should check this one out. I am so happy I was given the opportunity to read this, because it has broadened my love for the music culture and how it has progressed to what we have today. An amazing read!

If you would like to buy or know more about One Model Nation OGN you can find it at www.titanbooks.com