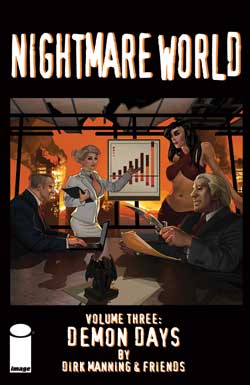 “The Armageddon is over and The Devil has won. In this latest collection of stories culled from the hit Shadowline Web comic series, learn how the previous NIGHTMARE WORLD tales of Irish fairy-folk, vengeful zombie killers, alien ultra-heroes, Cthulhu and more combine with these 13 new tales of terror to reveal Lucifer’s sinister plan to control Creation, revealing the haunted underbelly of a monstrous world all too similar to our own in the chilling tradition of Tales from the Crypt and The Twilight Zone.”

Dying Breath: 4.5 out of 5
Dirk Manning has something hidden in his name that eludes to describing his writing on this book… the “MAN”! I love Nightmare World, I love how complete each short story is, and that sense of being horror-full after reading it. Vol. 3 follows up the first two with nothing but some damn good top-notch horror work. I have to admit that to me the highlight of the book is a story called “Hungry Like the Wolf.” No words, simple images and yet such a solid piece.

The artwork from story to story is on point, readers of previous volumes will notice who has come back. A great point that Dirk will make in interviews is explaining how he would pair up stories with the right artists, and it shows. Some of my favorites were “Paranoid”, “In the Meantime” and “Extraordinary Machine.” Like I already stated, Manning’s writing is fantastic. He has such a solid grasp on being able to present solid story after story in 8 pages or less. The over arching story plays out and is brought together nicely in this final collection. I don’t think I can make this review any easier on you reader, the Nightmare World series needs to be in your collection. This volume may be the last for now, but I know that there are 13 more stories to tell, so have no fear I will bother Dirk until they get printed!

If you would like to buy or know more about Nightmare World Vol. 3 you can find it at www.shadowlineonline.com/ 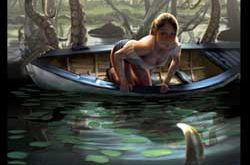