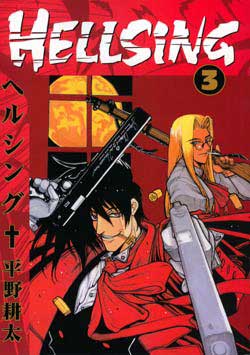 “VAMPIRES! NAZIS! BLOODSHED! ACTION! Add to that a healthy helping of sleek style and an exotic locale, and you have Hellsing Vol. 3. Our scant troop of vampire-killing vampires and mercenaries are planning a little trip overseas… to beautiful South America, in search of the elusive Millennium Project, and old Nazi organization with very secretive origins. It’s the start of a war, and only time will show how nasty this war will become. But one thing’s for sure, the vampire Alucard will make sure it gets off to a fitting start.“

Artwork: 4.5 out of 5
I love the look of this book! I think it is straight of the t.v. screen most of the time. The art is so fluid, and you don’t get those odd, WTF is going on here panels. If you have read Manga before you know what I mean, and if you don’t, sometimes there are action scenes that are just odd. I turn the book every which way but never have any idea of what is going on. You don’t get that here. You know if I were to compare this to an animated show, other than itself, it would be Trigun. You have great character designs and yet sometimes you get hints of humor/cartoonish fun thrown in. Overall another great looking volume.

Story: 3.5 out of 5
I will admit I was confused when this one started out. Sure it had been a few weeks since I read Vol. 2, but I was lost. As the story progressed I started to understand and then by the end I was back on track, but it wasn’t as subtle of a transition as I would have preferred. One major issue I can’t stand, is the way that accents are depicted in such broken English. I spend more time trying to figure out what they are trying to say than anything else. Overall though the story is a lot of fun and each volume keeps adding more and more to this intriguing universe.

Dying Breath: 4.0 out of 5
Another great round of artwork that was kind of held back by the story. Not as strong as previous volumes but still a lot of fun to be had. Hellsing is a great comic version of an Anime. It’s full of life and just flows so well. Allucard is one of the coolest Vampires in comics and I just can not wait to go from one Volume to the next. Solid stuff here and well worth the money to be added to your horror collection.

If you would like to buy or know more about Hellsing Volume 3 please go to www.darkhorse.com/ 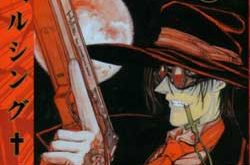