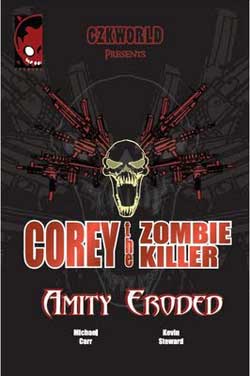 “The story starts 1 year after the infection has taken place. This is where we find Corey (young human man). He learns his survival depends on finding someone to trust in a corrupt zombie ruled planet. Every turn is a twist….leading to the unforeseen and a rising body count. A rising human and zombie body count…”

Dying Breath: 3.0 out of 5
Corey the Zombie Killer is a fun take on the zombie genre. The issue does many things right but I did notice a few things that could be touched upon. What the book does right is introduce us to this dark world. The artwork is good throughout, as there were never moments of confusion on my part during certain action scenes. However there were a few panels where it seemed Steward may have been trying to do a little too much. Backgrounds blended in with the rest of the panel and it seemed off. The bulk of the art though consists of great white and black work. I also think that hand lettering on the sound effects would add more to the visual aspects of the story.

The story itself did a nice job of getting from point A to point B, but it also had some rough moments. The dialogue was good, but I didn’t really get a feel for any of the cast. The background of this world is fleshed out nicely, so to not get much info on the main character was a bit of a letdown. However I think it is something that will be fleshed out more as the story moves into future issues. Overall this book is a solid #1. You get the introduction to the world, the cast and the visuals convey what is going on. I like the concept here and am very excited to see where this series goes.

If you would like to buy or know more about Corey the Zombie Killer you can find it at czkworld.blogspot.com/