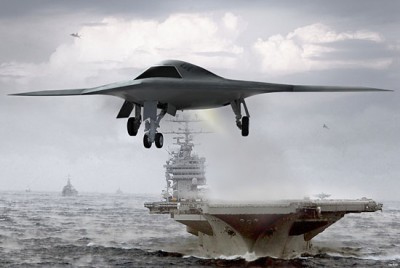 UFO sightings reported on the Maryland Beltway late Tuesday night turned out to be a Military drone. This was an 82 ft long aircraft that looked very much like your traditional UFO, being transported on the back a flatbed truck from West Virginia to the Patuxent River Naval Air Station. Maryland State Police were flooded with phone calls from concerned citizens wanting to know what this unidentified object was traveling down I-495.

If you believe what they tell you, because the Government never lies, the aircraft was a X-47B, an unmanned combat air system demonstrator. This aircraft is designed to take off and land aboard aircraft carriers. I’m not saying that not what it was, but if was a really honest to god UFO, I seriously doubt that the Military would fess up and tell the public the truth. I mean, why start now? Unfortunately, through years we’ve been programmed the believed that THEY are hiding something from the public.

It’s going to be hard to take anything they have to say about UFO sighting at face value. It’s funny to read all these news reports not raising any questions and just accepting what they’ve been told. It’s not suspicious at all that they were transporting this craft during the dead of night. It seems to me that enough people took notice to something strange on the Maryland roadways that maybe we should second guess the information at hand.

Did anyone go back and ask the witnesses to compare what the X-47B looks like to what they actually saw? I would, but that’s me. The Government has been keeping us in the dark for far too long about UFO’s and alien encounters.

I’m going to try to attend the next UFO meetup.