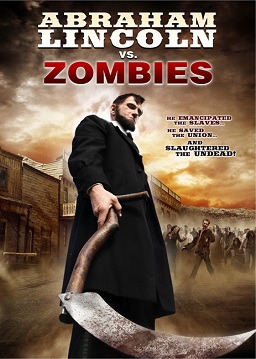 While the Civil War rages on, President Abraham Lincoln must undertake an even more daunting task – destroying the Confederate Undead.

It looks like ole honest Abe wasn’t so honest after all. We know he was responsible for freeing the slaves, but he hid so much from us. Not only was he a vampire hunter, he also found time to decapitate zombies with his scythe. I’m sure that once I tell you the name of the film is “Abraham Lincoln vs. Zombies” then you will automatically assume that it’s a low budget attempt to cash in on this summer’s big budget release of “Abraham Lincoln: Vampire Hunter”. Your assumption would be right, also you will most likely assume that The Asylum would be behind the former and you would also be correct. Aside from a few inspired moments I really had a hard time enjoying the film. Actor Bill Oberst Jr. makes a pretty convincing Lincoln, there were plenty of zombie slayings, I just felt that the film should have tried to be more fun and not take itself as seriously as it did.

We first see a young Abraham Lincoln witness his father commit suicide while his mother is a zombie chained to the bed. He wastes no time putting her out of her misery with his weapon of choice: a scythe. We then move ahead to 1863 and President Lincoln (Bill Oberst Jr.) has just heard news that something has happened at one of the forts. There is only one survivor that Lincoln goes to question about the situation. It quickly becomes clear that it’s an outbreak, much like the one that claimed the lives of his parents. He assembles a team, which he leads, to investigate. After a brief confrontation with the Confederates and Stonewall Jackson, he realizes that they must band together to contain the situation before it spreads across the countryside.

My main issue with the film was that it took itself FAR too seriously. With a premise as silly as this, there should have been loads of fun to be had. There are shining moments here and there but they are few and far between. When I saw the cover art with the tag line “He emancipated the slaves, he saved the union and slaughtered the undead!!” That made me laugh out loud. Moments are scattered throughout the film that fall in line with that same tone. Watching Lincoln with the scythe lopping heads of zombies is a definite treat. Though I couldn’t help but grow annoyed with the abundance of cruddy CGI blood splatters and gun smoke. Not sure why but one scene that stood out for me was when Lincoln had a young boy on his shoulders so he could fire at zombies over a brick wall. The boy kept shouting what direction to shuffle in. We are treated to this wide shot of the president shuffling back and forth looking like a duck from one of those video games.

The script is chock full of corny dialogue and an abundance of “inspirational” speeches by the president (including that one you may have heard before about Gettysburg). I don’t want to take anything away from Bill Oberst Jr. The man does a pretty great job at channeling his inner Abraham Lincoln. The rest of the cast was passable. I’ve seen worse. I also thought the ending was pretty clever but I won’t go into detail, I don’t want to ruin it for anyone.

This is the first Asylum “mockbuster” (I believe that is how they refer to them) that I have seen. I have been curious about them for a long time and I guess I still am. I wasn’t real thrilled with “Abraham Lincoln vs. Zombies” but it wasn’t a complete waste either. If you’re an Asylum fan then I’m sure you will not be disappointed. If I was just some Joe Schmo who didn’t know any better, I’d be pissed. A little light on the gore and most the zombies look really silly but watching Lincoln on the attack offers up some decent entertainment. ** (out of 5)