While visiting a cabin with her husband, Julianne becomes disturbed with horrific visions which question her sanity.

I just spent 15 minutes trying to decide if I could get away with my entire review saying only: This film is pointless.

But that doesn’t seem fair. Not to the people that actually took the time to make this movie or the people interested in finding out whether it is worth watching. So I’ll soldier through and write a longer review. Even though I think you can pretty much figure out my feelings from that opening statement.

Anyways, the plot to The Inner Room pretty much goes like this: husband and wife arrive at cabin deep in woods. Wife has some mental issues and husband takes terrible pictures of things. Wife begins seeing things that may or may not be real – chicks wandering around in nightgowns, Billy Mahoney from Flatliners, someone stealing a baby. She continually wanders off though her husband freaks out about it and she promises not to do it again. She gets progressively crazier, he gets progressively angrier, until eventually they decide to call it quits and head home. But then they find signs that maybe wifey isn’t so crazy after all, and maybe those people she’s seeing are really ghosts. But who killed them and why, and why is the wife the only one that can see them?

I won’t describe the end here and not because I don’t want to spoil it, but because it just isn’t worth it. It makes no sense and I found myself not really caring about it once the movie jumped the shark (and the giant squid and the Fonze). I was basically just waiting for the end credits to finally roll. 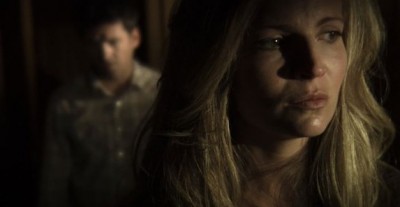 Like some of the other movies I’ve reviewed, this one felt like it was really two different films that had been spliced together at some point. There is the whole storyline with the husband and wife and the loss of their baby, and then there is the storyline with the ghosts and the murderer in the woods. The connection that is made between them is flimsy at best and stupid at worst.

There was a red herring going on for a while. I bet TheBoyfriend (my poor put upon constant viewing partner) $5 that the plot was gonna play out with a Hellraiser: Inferno non-twist. He countered that he thought it was going to be more like What Lies Beneath. If you have seen either of those, you will understand what I’m talking about. If not, maybe you need to see more movies. 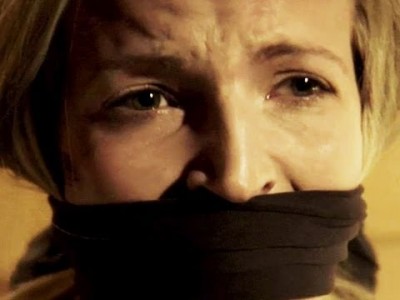 It turned out in the end that neither of us were correct (yay I get to keep my $5!). Because the twist (if you want to call it that which actually seems kind of grandiose for this movie) was much dumber than either of those theories. It basically boiled down to being a haunted house story – that pretended to be some kind of schizophrenic serial killer story.

While The Inner Room looks professionally made and is edited relatively well, I wasn’t impressed with the fact that they couldn’t seem to decide if they wanted a handy cam or steady cam look to it. There were several moments were the audio went wonky, and the dialogue was pretty flat. Compared to some other small budget horror flicks I’ve seen lately it looked better than average.

But that didn’t take away from the fact that in the end, it felt really pointless to have sat through this entire film. I took nothing away from it, I didn’t care about the characters, and I have a feeling that tomorrow I won’t even remember what happened in it. 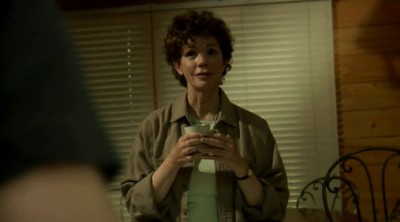