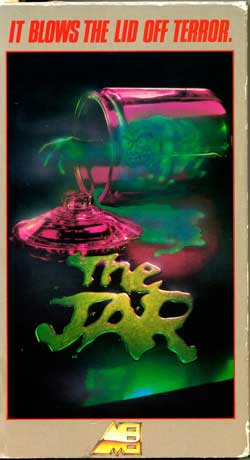 A motorist who comes upon an auto accident finds a bottle at the scene. The bottle contains a demon who proceeds to possess him.

Day 4 of the 80’s experiment and I am fated to watch something called “The Jar“. Oddly enough I vaguely remember this title from way back when I used to work at a video rental joint in Manhattan (Rent N’ Run Video). I remember it looking pretty cheesy but I never watched it, nor do I remember anyone ever renting it either so it’s with a sense of anticipation & a modicum of dread that I insert it into my DVD player. Literally 30 seconds after it started I realized why it was never rented… 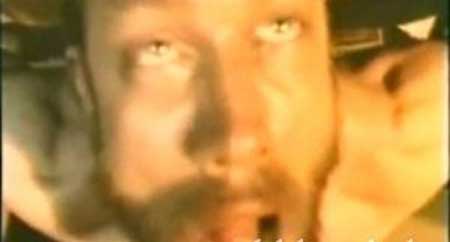 Directed by Bruce Toscano, “The Jar” is about a poor schmuck named Paul (Gary Wallace) who happens upon an auto accident while driving home. At the scene of the accident he finds an old man who seems to be dazed but shows no outward signs of injury. Paul takes him home with him (I couldn’t tell you why) and after trying to convince the man that he should be seen by a doctor anyway, suddenly finds that the man has disappeared from the bed he was laying on! Where did he go? And what’s in the paper bag he left in Paul’s apartment? Well, I was hoping it would be something really cool since the scenes I just described to you take up about 20-30 minutes of the film’s total running time and are as slow as frozen molasses running down a glacier in Antarctica.

But no such luck. What the bag contains is a jar (Or a bottle of some sort, hard to tell) & it contains what seems to be a little rubber beastie that just sits there. It says nothing, it does nothing, it’s just there. I suppose that’s the reason why we only see it for a nanosecond before the camera gets back to Paul who sits and looks at it curiously. I guess he wasn’t too impressed with the fact that he has a little blue thingie with eyes in a jar/bottle sitting in his living room. He probably has a closet full of them already so what difference is another one gonna make anyway? 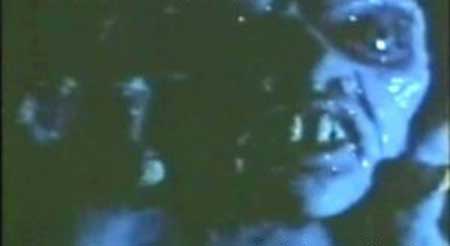 Now the sh*t tries to get weird. Paul’s bathtub fills up with red paint pretending to be blood, a kid emerges from it and then both he & the paint vanish. He gets in the shower & becomes engulfed in a green light, he brushes his teeth & the old man suddenly appears behind him! A light emanating from a room in his home mesmerizes him and he enters the room. He falls into a pit and then he suddenly awakens, dazed and confused (Mea Culpa Led Zeppelin). We even get a quick look at his dingle as he arises, not that I notice that kind of thing….not me.

All of a sudden Paul decides that he is not the one to sit still while being terrorized by a little rubber whatchamacallit in a bottle so he gets dressed and tosses the bottle into a garbage bin. That’ll show all the other inanimate rubber little whatchamacallit’s in bottles not to mess with him! In the elevator back home he meets Crystal (Karin Sjoberg) and they promptly have some coffee together during which he complains to her about his problems & about an auto accident he got into a while back. He thinks that his head might be “Messed Up” from the accident, I don’t know about his dumb ass head but my head was slowly slipping into a state of catatonia as this thing proceeded.

I’m not too sure what writer George Bradley was shooting for here but not only is it pretentious & boring it’s boring & pretentious! I think it’s some kind of attempt at a bad art film dressed up as a really bad horror film. Dialogue is minimal and nonsense is in abundance in this stinkeroo. Most of what happens takes place in Paul’s apartment and since Paul might be wigging out just a little bit what we get are scenes that don’t make a whit of sense. Scenes are disjointed and scattershot and seem to exist just to confound the audience. The damned jar reappears back in his apartment even though he dumped it earlier. So this time he smashes it to pieces with a metal rod, not that it helped any because it just comes back with the little blue rubber meanie still sitting in it, without movement or emotion. Some of the scenes seem to suggest that Paul has dropped some LSD and is having a bad trip but we don’t really ever find an answer to any of our questions. It ends with a ridiculous scene that seems to indicate that someone thought there might be some sequel possibilities here. HAH!! 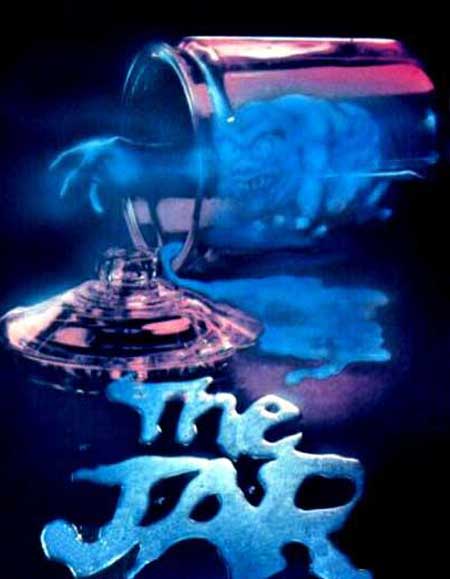 “The Jar” looks like it was shot with a standard camcorder, all of the scenes are lit with whatever light was available so it’s a muddy, disheveled looking movie as well. The story is more of a series of unexplained sequences haphazardly edited together to reach an 80 minute running time. The “actors” have hopefully moved on to bigger & better things like highway maintenance or something to that effect. I sure hope everyone involved in this disaster has found their true calling because making movies ain’t for them. I cannot believe that this was released in any format available at the time it was completed, it is that bad.

I tried to look into the history of “The Jar” and find out some inside information but all I could find is an estimated budget of $200,000…TWO HUNDRED THOUSAND DOLLARS? This looks like it cost $200 dollars and I’m being generous to a fault. If this thing cost that much a federal investigation should’ve taken place cuz’ somebody ran away with the money. Zero shrouds for “The Jar”, a film you should watch only if you want to punish yourself & you don’t have a cat o’ nine tails to whip yourself with. And really…is what you did so bad that you have to punish yourself by watching this? I did all of the dirty work for all of you penitents already. Take a break from mutilating yourselves, OK?

This whole “80’s experiment” is taking a very ugly turn acolytes. It’s gone from bad to worse and I daresay I’m scared of the next calamity I’m being forced to watch. My ever so nasty editor is truly a demon, a demon looking to drive me insane before escorting me “Downstairs” to meet the big red guy. You know, that might be preferable to sitting down to watch the next movie.

Pray. Pray for The Black Saint….