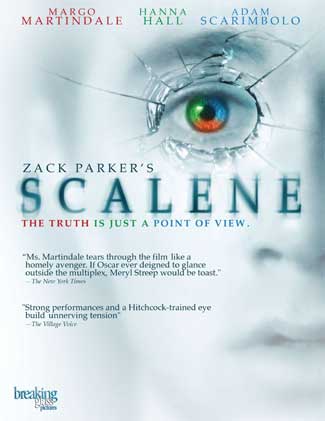 Written and directed by Zack Parker, and starring Emmy Award winner Margo Martindale (“Justified”, “A Gifted Man”), Hanna Hall (Rob Zombie’s Halloween, The Virgin Suicides) and Adam Scarimbolo (Stake Land). Scalene brings the best and the worst in everyone to the surface in a twisted, layered tale of betrayal, lies and revenge.

Scalene is a perceptual thriller told from three points-of-view revolving around the rape of a female college student by a mentally handicapped man and his mother’s subsequent breakdown. In the varying views, the absolute truth takes a backseat to who can tell the most convincing tale. What really occurred, and who will you believe?

Scalene is the winner of the Dances with Films Best Feature Grand Jury Award and took home the awards for Best Feature and Best Director from the Cincinnati Film Festival. The New York Times called it a “disturbingly clever drama” while the Village Voice said that “strong performances and a Hitchcock-trained eye build unnerving tension.”

The DVD release will come packed with special features including a prologue to the in-depth featurette Perceiving Reality: The Making of Scalene, and the Dances with Films world premiere Q&A and Awards Ceremony featurettes.