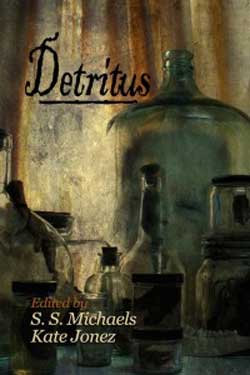 I’m a big fan of anthologies, and always look forward to new ones. Anthologies were big in the 80s, and I have a bunch on my shelf. They seem to be making a comeback; I’ve been seeing a lot of calls for submissions for anthologies recently, and that’s great.

Detritus is an okay anthology, not great. There are no bad stories; however, a lot of the tales are just run of the mill and don’t stand out.

The first story, “Chewed Up,” is by bizarro fiction writer Jeremy Shipp. As with most of the stories I’ve read by Jeremy, it’s a little odd, a little creepy, but beautifully written. It seems like a typical love-gone-wrong story until the end when you realize it’s a very sad tale.

“Ride,” by Brent Michael Kelley is another story that leads you on a certain path then veers at the end. One of the shortest in the book, it’s almost one of the most powerful.

“Mrs. Grainger’s Animal Emporium” is the first story I’ve read by author Phil Hickes. Phil takes a typical story of retribution and karma and makes it interesting. The subject is nothing new, but still a fun little story to read.

If you enjoyed The Collector by John Fowles, you’ll really like “Candy Lady” by Neil Davies. Reminiscent of the Fowles novel, “Candy Lady” delivers a nasty little twist at the end that really makes the story.

“Heroes and Villains” by Michael Montoure combines hoarding with comic books, and will make any fan boy collector cringe at the climax.

The last story, “The Room Beneath the Stairs” is by one of my favorite authors, Kealan Patrick Burke. Things aren’t exactly as they seem at Grandma’s house, and Andy, who is resentful and bored at having to visit his grandmother, will find out what creepy secret Grandma is hiding.

The rest of the stories (there are fifteen) are good, but again, they don’t shine like the others. But if you collect anthologies like I do, you’ll be glad it’s on your shelf.