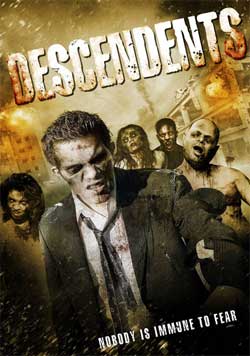 In an unknown future, the earth has been destroyed by man and the air is polluted with a mysterious virus that turns humans into zombies.

“Descendents” is a perfect example as to why the indie horror film is thriving much stronger than any other genre. Probably more than any other genre the shear amount of garbage is mind numbing, but if you take the time to sift through that garbage, you never know what you might find buried beneath. “Descendents” isn’t great, it’s unique. And that really goes a long way, especially when there are so many remakes and sequels that flood the market. Director Jorge Olguin used very little money ($25,000 estimated) and loads of imagination to craft a post-apocalyptic story told through the eyes of a young child. The film is a little slow moving but it has vision, a unique perspective of a world where humans are on the brink of extinction, and the infected run rampant. 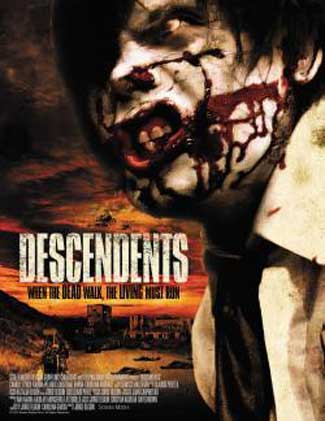 Camille (Camille Lynch) is a young girl who is left to live on her own in a world overrun by a mysterious infection that turns humans into flesh eating monsters. She is part of a group of children that were born immune to the infection, so she can live in the world without that fear. What she does have to fear are the remaining human soldiers that wander around with gas masks and are out to kill anything that moves and isn’t part of their military. Through flashbacks, we learn of Camille’s relationship with her mother (Karina Pizarro) and how it led her to that point in her life.

“Descendents” has many problems. The narrative really moves at a slow pace and there are attempts at dumbing down the story (I assume for budgetary reasons) that instead of being informative end up just being annoying. The effects also look a little rough around the edges but still mostly passable. One complaint I had was the fact that there is very little dialogue and much of the story is told in narration. I found it to be a bit much at points. 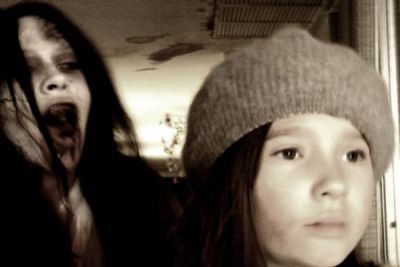 The film excels in the overall look. This dystopian future has a look all its own. Plenty of filters are used to give the world a really washed out look, like everything has faded. The only time we are treated to any bright colors is when blood is spilled or, in a slick effect, splashed onto the camera lens. The CGI effects are relatively effective but a few end up looking really ridiculous.

Camille Lynch carries the film well enough, though her inexperience is apparent throughout the film. The same can be said for the rest of the child cast. The film excels when we get to learn about Camille and her mother. Those scenes give insight into the world they have to live in as well as the relationship between mother and daughter. I don’t know anything about Chile as a country or it’s past but I sense that there is some sort of political commentary on the state (and or former state) of affairs within the country. Throughout the film we see Camille traveling alone, a child with nowhere to go. At a certain point she meets a group of children that share the immunity to the infection. These scenes are a nice change since we get to see her being a kid and trying to have normal interactions.

I liked “Descendents” quite a bit. It proved to me that some filmmakers are still trying to do something a bit different. That is always refreshing to see. It was a little light on the action and very few “infected” are actually seen, when they do we feel the impact. One thing I do have to mention is that this film may have one of the most bizarre endings that I have ever seen. *** (out of 5). I enjoyed the ambitiousness of the project, the attempt at doing something original. Olguin makes a few mistakes but on this miniscule budget he manages to at least make a statement.