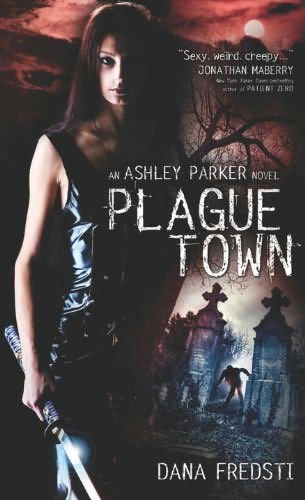 Synopsis-A college town is placed under quarantine by the military after a virus causes a zombie outbreak to occur. After being attacked by a herd of zombies and surviving Ashley finds out that she is a “Wild Card”-the term used by the military for people who are immune to the effects of the virus. She is teamed up with a small group of wild cards and they set out to destroy the zombies and prevent the virus from spreading. Will the team be successful or will they all end up as zombie chow?

Review-When I first got my copy of Plague Town I thought to myself Here we go again, yet another zombie apocalypse novel just like the last ten or so that I’ve read recently. I was pretty much ready to dismiss it before I even started it, but to my surprise after reading just a handful of pages I was hooked. Dana Fredsti writing style really appealed to me (she does a great job of combining humor with serious situations) and I had a great time with this book. It is well-written and entertaining, and what it lacked in originality it more than made up for with a healthy dose of action as well as some fun death and destruction. I found this book to be a very enjoyable thrill ride, and when I finished it I found myself looking forward to the next installment (it ends on sort of a cliffhanger, leaving the door open for the next book in the series).

I think that the main reason I liked this book so much was due to the fact that Fredsti has a talent for creating likable, realistic characters that the reader cares about. Ashley, in particular, is an awesome character that jumps right off the page at you. She is a total badass who doesn’t take sh*t from anyone but at the same time she is a kind, caring person who has her own problems, worries, and desires. She is a very strong, complex character and I dug her, and I think that many readers will too.

In addition to Ashley there is a whole slew of unique characters that appear in the book that are just as interesting. They all have distinct personalities and I liked all of them. Gabriel (Ashley’s love interest) starts out as a total prick but becomes pretty likable as the novel goes on. Kai is the charming African American college student, Lily is the quiet, sweet chick that Ashley feels the need to protect, Mack is the caring mailman who is a father figure to an extent to his fellow wild cards, and Kaitlyn is the stuck-up bitch who does nothing but complain. There’s also Tony, who was one of my favorites as well. He is a teenage wild card who is into video games, music, and movies, and when he isn’t having a blast wiping out zombies he is quoting lines from movies, much to the chagrin of his teammates. He is a total smartass as well, and his interactions with Kai are priceless. I grew to really like these characters as I was reading the book and wanted them all to survive, but unfortunately that isn’t the case. Who doesn’t make it? You’ll have to read the book to find out because I’m not saying a word.

The plot may not be the most original but it is better than the other books that contain a similar premise that I have read lately. Fredsti throws in some cool twists and surprises from time to time and there is a big shock at the end that is related to the origin of the virus that I thought was pretty cool. I also enjoyed the pop culture references and the nods to games, movies, and filmmakers who are associated with zombies (the wild cards break into two teams at one point and it is suggested that they are called Team Romero and Team Fulchi, they watch classic zombie movies such as Dawn of the Dead to prepare themselves to fight the zombies, Tony mentions playing Resident Evil, etc). There is also a great deal of action taking place in this novel, so if you are a fan of reading about people being ripped apart and eaten or enjoy the thought of zombies being taken out in a variety of different ways then Plague Town is right up your alley.

I really liked this book. Dana Fredsti is a hell of a writer and a great storyteller. I am eager to check out the next chapter of the story and hope that it is available soon as I can’t wait to see what she has in store for Ashley and the other survivors. If you are looking for a great read that really holds your attention and is extremely hard to put down then this book is for you. Take my advice and pick up a copy soon, you won’t be disappointed. 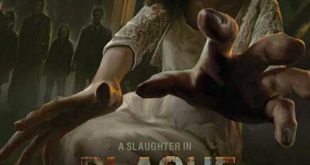 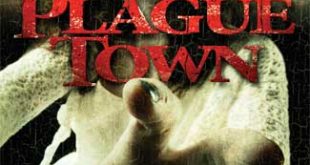