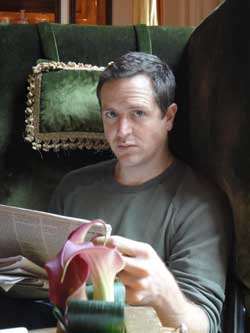 Hugh Howey is an incredibly talented writer/author and he has a new book coming out entitled I, Zombie, Hugh was kind enough to take part in an interview and he gave us the first look at the cover of I, Zombie. Check out the interview with Hugh.

Janel – Tell us a little about yourself?

Hugh – I’m something of an accidental author. I had a nice career going as a yacht captain, which meant living on someone else’s multi-million dollar boat, eating their food, driving them around from one exotic locale to another, and generally living the sort of life that engenders scowls of envy from relatives.

Of course, it was a woman who put an end to all that gaiety. I met the love of my life and became domesticated (after much struggle). We’ve been together ten years. When I followed her away from the coast, I began to dabble in an old dream: writing novels. I never thought it would turn into a career or that there’d be any demand beyond friends and family (and even they, I suspected, would be reluctant sufferers).

However, after a few years of constant labor and toil, I was able to quit my string of various day jobs and return to a line of work that doesn’t require shirt or shoes for entry. And one that has brought back the scowls of envy from loved ones.

Janel – What or who inspires you to write and why?

Hugh – It has always been my readers who inspire me. At first, that was simply my wife, who read the daily output of my very first rough draft. She would come home, read in fifteen minutes what I had written in eight hours, and ask for more. That really pushed me to produce and to craft as thrilling a story as I could summon. Now I have a hundred thousand readers urging me on in a similar manner, interacting with me online, sending me emails and fan art, and I get up every morning inspired to entertain them a little more.

Janel – If you could write a book with anyone who would it be and why?

Hugh – I would say my great friend Jonathan Hayes. He’s one of the most brilliant writers working today and a man I very much respect. Your horror readers would get a kick out of his books, which are inspired by his line of work. Jonathan is one of the chief medical examiners of New York City. He sees things more gruesome before lunch than most of us will encounter (thankfully) in our lifetimes. And despite this (or perhaps because of it), he is one of the funniest, nicest, coolest human beings around.
I could probably answer a dead celebrity or some star author out there, but none would be as fun to pen something with as Jonathan. 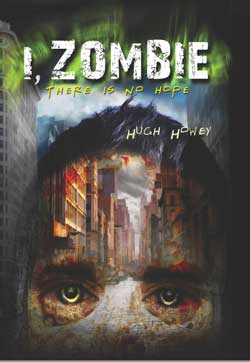 Janel – You have quite a fan following, how do the fans inspire you and what are your thoughts on the social media sites?

Hugh – I love this crazy and connected world we live in. I get messages and bits of artwork from fans all the time, and some of them move me to tears. A professional artist recently sent me covers for two of my books, and they are better than just about anything you see in bookstores today. This is a masterclass artist who has designed currency for foreign countries and works on ads for major corporations, and he felt inspired to capture my stories in artwork that far exceeds them.

I’ve also formed friends with active servicemen, exchanged books for crochet swatches inspired by my books, and bounce emails back and forth all over the globe. Ten years ago, I wouldn’t even be published, much less read in dozens of countries. I owe so much to these technologies.

Hugh – I did. I went through phases, though. I might read nothing but fantasy for a year, then SF, then classics. Right now, I mostly read non-fiction. I find more inspiration for my stories out of the sciences and from history books than I do in other works of fiction. I’m terrified I’ll limit my options by seeing what everyone else is doing.

Janel – Who is your favorite author and why?

Hugh – For fiction, I’d have to say Neal Stephenson. His last two haven’t been my favorite, but THE DIAMOND AGE, CRYTONOMICON, and his BAROQUE CYCLE trilogy are top-notch stories. I also enjoy Peter F. Hamilton. On the non-fiction side, I enjoy Stephen Pinker’s works. One of the most brilliant men alive today.

Janel – “Mouth Breathers” is just one of your very fascinating short stories, when you are writing the short stories, how do they differ for you from writing a book?

Hugh- They are much more difficult, believe it or not, for me, at least. With a short story, you have limited space for character development, so every action, every thought, has to flesh out the character while propelling the story forward. I love the challenge. Long works, frankly, are much easier because you have all the space in the world in which to expand your ideas.

Janel – What can you tell us about your upcoming zombie based book and what prompted you to write a zombie inspired book?

Hugh – Fans of Wool have been clamoring for a zombie book. It started off as a tease, but then I started writing and fell in love with this concept of people trapped in a zombie state, unable to control their actions, and left tormented by what they were doing to other people. I fell in love with these monsters, with the touching memories they had locked away inside their skulls. The more I wrote, the more I realized this was something people would enjoy.

Janel -What do you think of the current zombie genre right now?

Hugh – I love that the genre is popular. I’m a huge fan of the Walking Dead comics. I’ve been reading Kirkman’s stuff since the very first issue (INVINCIBLE, as well, which is also superb). I think zombies can reflect a lot about the human condition, which is what I’m trying to make explicit with I, ZOMBIE.

Janel- Okay, Hugh? Would you rather be a survivor or a zombie if the Zombie Apocalypse should ever happen?

Hugh: Survivor, for sure. Just to see how long I could last. I have a bad feeling, though, that I’d be one of the poor saps who got to experience what it were like to be both!

Janel – How often do you do readings for your readers and how often do you appear at The Tin Roof and will you be appearing at any other signings or conventions this year?

Hugh- I try to do a reading at the Tin Roof with each major release. They’ve been having me since my first book came out and are just incredibly supportive of my writing. The turnouts get bigger and bigger with each release, which is awesome.
Since my readers are spread out all over the place, I’m trying to do more videos on my website, so I can reach all of them at once. There are so many tools authors can use these days. I’m trying to get more practice with and more use out of all of them.

Hugh- I used to be a decent chess player and can also run the table in a game of 9-ball. I think these are two strange things to be good at. I’ve just lived a very distractible life, which means I’m decent at a handful of things but excellent at almost nothing.

Janel- What is next in the journey of life for Hugh C. Howey?

Hugh: First, a move to Jupiter, Florida, the only proper home for a science fiction author. Well, actually, we’re moving because my wife took a job at the university down there. So, this week we’re closing on a small home down there, and in a few more weeks we’ll be Hugh- selling our lovely little home in Boone, N.C. It’s sad to be leaving a place I love so much, but I’m looking forward to the adventure of somewhere new.

Also, I just agreed to terms with a major publisher in the UK, which means a hardback release of the Wool books there and in Australia / New Zealand. That’s exciting. And we have offers for the film and TV rights that we’re discussing right now. I know the chances of something being made are very thin, but it’s fun to dream.

Janel- Thank you and it is an honor to interview you.

Hugh- The pleasure was all mine!

You can check out all of Hugh’s incredible work on his website www.hughhowey.com/ and “Like” Him on Facebook via www.facebook.com/hughhowey  Also check out Hugh’s new book I, Zombie and you can check out much more of Hugh’s work at www.hughhowey.com/ and also the Wool series with cover art done by the talented Mike Tabor. For those of you on Twitter you can “Follow” Hugh on Twitter @hughhowey