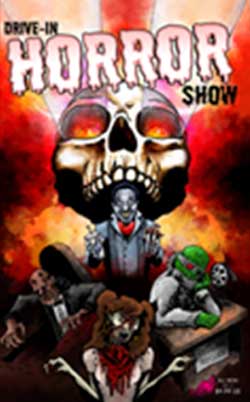 “Some films won’t stay dead” is the tagline for Drive-In HorrorShow. It’s fitting, because the movie has taken on a life of its own. The independent film originally premiered in 2009 and hit DVD in 2011. The filmmakers also released the original soundtrack on both LP and CD as well as a DVD featuring music videos for the tracks. The latest addition to the expanding collection is the first in a planned series of comic books.

The film is an anthology in the tradition of classics such as Creepshow and Tales from the Crypt, so I was expecting the comic to be an adaptation of one of the movie’s five stories. Instead, it delivers an all-new plot.

The comic, like the film, takes place in a post-apocalyptic world that is overrun by various monsters. There is your host with the most, The Projectionist, his loyal assistant, Billy Troll, box office worker Zombie Frank and concession stand attendee Teenage Axe Victim. You’ll recognize these familiarly frightening faces from the film, but seeing the movie is by no means a prerequisite to enjoy the comic.

Each Saturday night, boils and ghouls gather at the local drive-in theater to be tantalized by tales of terror. The story told in the comic is entitled The Good Luck Charm. Greed gets the best of an older couple when a mysterious man pawns his even more mysterious heirloom at their antique shop.

I won’t say any more about the story, but it’s a killer one from the minds of Greg Ansin and Michael Neel, who also wrote the film. Jerem Morrow brought the story to life with his illustrations, and Shi Blank provided coloring and graphics. The segments with the projectionist appear to be digitally colored, while the main story is colored with pencils.

The artwork looks great for an independent comic and really pops thanks to a high-quality print job. At about 50 pages, it’s longer than an average comic but remains a quick read. The book also showcases some fan-made artwork related to the Drive-In HorrorShow. Additionally, there is a foreword by HorrorHound Magazine writer Jessica Dwyer.

Much like how Drive-In Horrorshow brought to mind genre classics of yesteryear, its comic book supplement reminds fans of the childlike wonderment of reading a good comic. I hope that the team continues with more issues in the future, as the possibilities are endless.