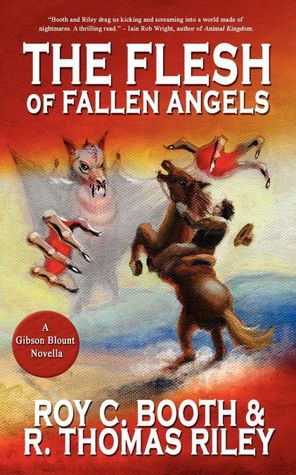 I remember, back in the idealized olden days of yore long forgotten (hence the idealization) by aging brain cells, when you new exactly what you were getting when you picked up a western. Men being men while hunting down the other men who done took their wife or town hostage. Outlaws. Gun slinging sheriffs. Whore houses in trouble. It was a simpler time. Then came these new fangled weird westerns, with their space ships and vampires and ghosts and goblins and all manner of hoobajoo. Somewhere in there, the whole mess got a whole lot more complicated. Enter the venerable Roy C. Booth and R. Thomas Riley stage right with their tale of gunsmoke and demons in the midst of the civil war.

Many years ago, Gibson Blount lost his family to a plague that no one saw coming. A Plague carried on leathery wings that whispered murder in the ears of the townsfolk, then drank deep the despair that followed. Now, Gibson travels the land, looking for other towns like his, towns that have been ripened for harvest by unholy beasts of nightmare. His goal isn’t salvation, it’s revenge and he won’t let anyone get between him and Azazel. But now he’s found help in a priest, a prostitute, an angel and William Quantrill.

First and foremost, let me say that layering a story about the conflict between angels, both fallen and otherwise, over the historical backdrop of the American Civil War was genius. The comparison between the two is never mention, but used quite well in subtext. Warring angels referring to each other as brother, the knowledge that their war did nothing more than destroy their home, the fact that the reason for fighting is largely forgotten in the midst of the fight and the humanization of those who are ostensibly the most evil are all used to great effect without smacking the reader in the face with it. Nice job, gentlemen.

Onto the story itself: the premise (stranger rides into town, knowing that a great doom is coming but no one believes him until its too late) isn’t exactly new, but its used well here to develop the initial tension. Its paced well and, once it gets moving, doesn’t stop or slow down until the end. Also, the interspersal of Blount’s past sprinkled in along the way provided another tether that kept me running along to find out how he became the man he is. Often times, origin stories become dull because of the time it takes to establish where the character came from, but this approach allowed me to jump right into the action while being fed tidbits as it played out. I liked it.

Also, I got a big kick out of the demons and angels as well as the bits of sci-fi that were hanging around in the background of the supernatural. The angels are not the “flaming sword” types, seeming to have a preference for lead. Similarly, the demons are not of the bright red, cloven hoofed and giant horn variety. Instead, the canine-bat-chupacabra approach provided a feaky aspect without coming across as cheesy. I’ll keep clear saying too much about the “ship” or exploding balls, except to say that it added an interesting quantity.

But there are times that the writing itself gets a bit too thick for its own good, drawing too much attention to the style and away from the story. To me, the best westerns have been written in a very straight-forward way and I got bogged down a few times, especially in the beginning, by the style. Also, I was a little sad to see that Blount, very clearly established as a man with nothing to lose and motivated only by vengeance, was never placed in a situation where he had to choose between doing what was right and completing his quest. It makes him come across as too simple of a character if he is only presented with the right thing to do.

Overall, The Flesh of Fallen Angels made for a fun ride across the prairie. Full of guns, blood, demons and cowboy goodness with some dashes of interesting subtext and the boy have more plans for Gibson Blount in the future. I’ll be curious to see where he goes.