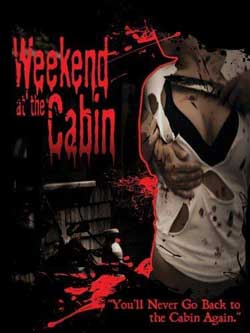 Going to for a weekend at the cabin could be deadly.

Some movies get off the ground running and never let up while others may take some time to get going, building connections and tension. Still others are more of a slow burn style that build inch by agonizing inch until everything comes together in a spectacular finale. “Weekend at the Cabin” doesn’t hit the ground at all. In fact it never really gets out of bed and only makes enough effort to call in sick with a lame excuse. 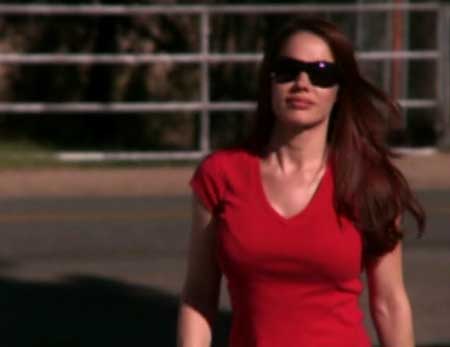 After an office worker inherits a remote cabin from an uncle and he invites his two friends and their respective girlfriends to spend the weekend there. Once there they eventually meet a neighbor who’s spending time in a nearby cabin and they invite him over for drinks. What they don’t know is that he’s kidnapped his ex-girlfriend and is holding her captive at his cabin, but when he falls for one of the girlfriends the group may not be as safe as they think. I’d like to introduce you to a personal phrase of mine that I use to describe a certain type of movie that “Weekend at the Cabin” fits into nicely; ‘Parade of Incredulity.’ 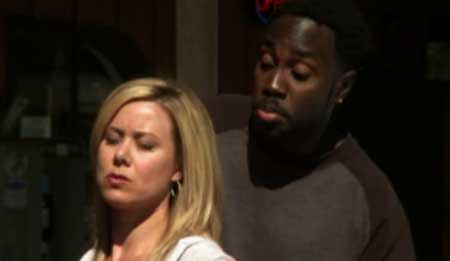 Let me explain; when a movie fails to maintain a suspension of disbelief it can jar you out of the characters and story. Say the hero injures a leg in the first act but later the injury seemingly disappears and the hero no longer suffers any ill effects, this type of discrepancy can devalue the experience of the movie. If this occurs regularly throughout then this can ruin an experience and is what I call a parade of incredulity. Event after event, line after line that rings false or doesn’t make sense will take over and this one is a parade from start to finish. Sometimes it’s just the little things; despite how remote and isolated the cabin is supposed to be there’s a surprisingly well stocked grocery store within driving distance, the neighbor’s cabin is within walking distance and the fishing hole inexplicably has an old man there to help along the plot. When we arrive at the cabin we are treated to a scene where one of the girls teaches the others how to light a fireplace, even though it’s the middle of the day, because some of them are cold, even though it’s summer. At least we get to learn how to light a fire. 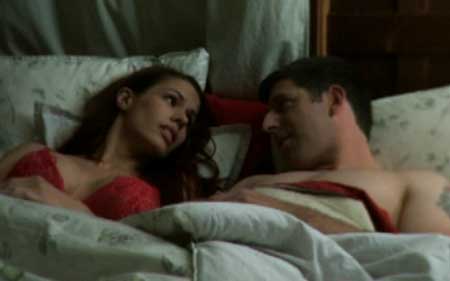 I have, on occasion, seen the parade of incredulity work for a movie. “Space Zombie Bingo” comes to mind as a good example but, as is often the case, it’s an intentional choice that ramps up the absurdity for comic relief. Though that doesn’t apply to “Weekend at the Cabin” there are more problems here than that. Though lit brightly enough the movie is often too bright or poorly balanced. At first this is easy enough to ignore but when subjected to it in scene after scene it actually becomes increasingly difficult to watch. The characters and their dialogue at best comes across as juvenile though the attempt to make it friendly and familiar is apparent. By far my favorite exchange between two of the characters is this;

Can you believe that crap? I wish I wasn’t making this up. Unfortunately there are times where the dialogue verges on being misogynistic as their ‘playful’ banter starts ‘arguments’ among them. While not perfect the movie was edited fairly well except for the climactic ending. Shots were clipped and the scene as a whole felt unfinished or rushed as if it were put together in class on the day it was due. 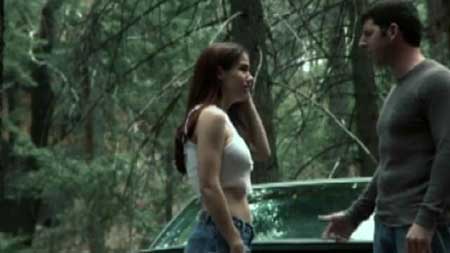 I understand that if you don’t have the money to put into your film then you have to put more of what you do have; time and effort. That’s not something you can do if you stay in bed, you have to get up, have some coffee and get to work. “Weekend at the Cabin” is a movie that had more work been invested then there might have been a worthwhile return.