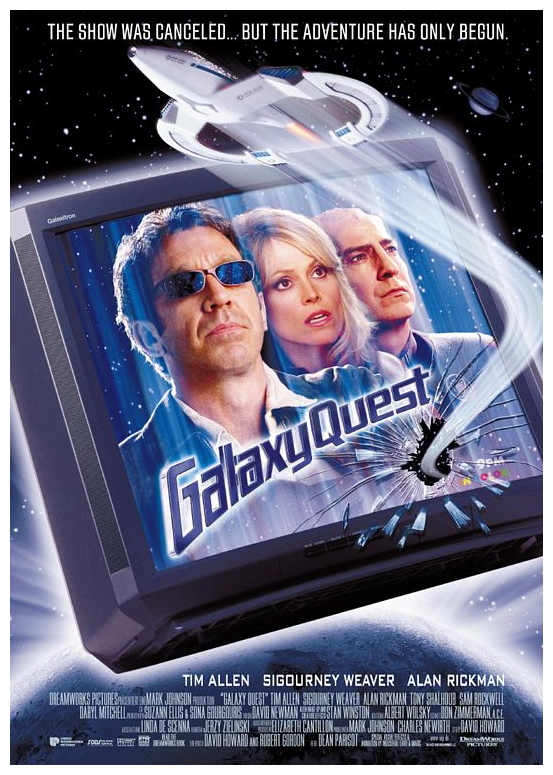 “Eighteen years after their sci-fi adventure show ‘Galaxy Quest’ was canceled, actors Jason Nesmith, Gwen DeMarco, Alexander Dane, Tommy Webber and Fred Kwan are making appearances at sci-fi conventions and store openings in costume and character. They’re wallowing in despair and at each other’s throats until aliens known as Thermians arrive and, having mistaken the show for fact and consequently modeling their entire culture around it, take them into space to save them from the genocidal General Sarris and his armada.” (courtesy IMDB)

The idea behind Galaxy Quest (1999) is so high-concept, inspired and filled with comic possibilities, it must have been one of the easiest pitches in film history. Although writers David Howard and Robert Gordon might deny that the project was launched so effortlessly, it’s difficult to imagine a more commercially appealing concept for a movie. Under the confident direction of Dean Parisot, the Dreamworks production has everything: comedy, pathos, action, spectacle and heart, delivered by a fantastic cast that includes not only Tim Allen and Sigourney Weaver, but also Alan Rickman, Tony Shaloub and Daryl Mitchell. The film even has incredible visual effects on its side with Industrial Light & Magic and Australian Ben Snow brought on board to provide many of the movie’s key fantasy elements, including hundreds of space shots and computer-generated creature effects. Also enlisted was Stan Winston, responsible for the alien design work and the film’s on-set animatronics and makeup effects. It also helped that executive producer Steven Spielberg popped in every now and then to lend his talents to the project.

The movie starts, appropriately enough, at a science fiction convention where the cast members of a long-defunct television series called Galaxy Quest are making an appearance. While signing autographs through an alcoholic haze, actor Jason Nesmith (Tim Allen), who starred as Commander Taggart, is approached by a small band of conventioneers who claim to be Thermians from the Klaatu Nebula. Looking rather pasty-faced and wearing seemingly authentic Galaxy Quest uniforms, the Thermians are virtually indistinguishable from the hundreds of fans attending the convention, which is why Nesmith initially dismisses their urgent requests for assistance. But these Thermians are the real deal, an alien race who have patterned their entire society on television transmissions of the old show, which they have intercepted and accepted as actual historical documents.

Operating under the misguided notion that Nesmith is an experienced starship captain, they transport him to the other side of the galaxy to help put an end to the evil General Sarris (Robin Sachs) who, with the aid of lizard-like henchmen and a giant warship called the Falcon, is intent on wiping out the Thermians forever. In the process of battling Sarris and other alien creatures such as little blue demons, reptilian pigs and a rock monster, Nesmith and the rest of the Galaxy Quest cast manage to find redemption, becoming heroes off-screen as well as on.

Replacing original director Harold Ramis at the last minute, Dean Parisot does an excellent job of reveling in the world of fandom, directly parodying the original Star Trek series while littering the movie with science fiction film and television references and visual gags (my personal favourite is the starship Protector’s serial number – NTE-3120 – NTE stands for Not The Enterprise). These Thermian aliens are portrayed as the ultimate fans, who have been dedicated viewers of the series from light years away. Their attempt to recruit the Galaxy Quest actors to help transform their world directly mimics the logic of Galaxy Quest’s earthbound fans and validates the reality that exists between fantasy and fan. For instance, the aliens’ interpretation of the show’s episodes as historical documents is representative of the way some fans have difficulty distinguishing fact from fiction.

Similar to the world of Star Trek fandom where dedicated fans are known as ‘Trekkies’, Parisot is able to accurately portray this by paying tribute to – as well as sending-up – the very notion of fandom. Several of the genuine so-called ‘Questrians’ get to assist the Galaxy Quest crew in saving the day. Nesmith has to convince fan Brandon (Justin Long) that it’s not just a television show, to which he responds, “Oh my God, I knew it! I knew it! I knew it!” There’s even a knowing reference or two to Sigourney Weaver’s previous incarnation in the Alien (1979) franchise as the hard-core kick-ass Ellen Ripley, as she’s crawling through the ship’s air-conditioning system: “Ducts. Why is it always ducts?”

The film was rightfully included in the Reader’s Digest list of the hundred funniest movies of all-time, but the best reviews I read came from the actual cast of Star Trek (courtesy Wikipedia). George Takei said, “The details in it, I recognised every one of them. It is a powerful piece of documentary filmmaking. And I do believe that when we get kidnapped by aliens, it’s going to be the genuine, true Star Trek fans who will save the day. I was rolling in the aisles, and Tim had that Shatner-esque swagger down pat. I roared when the shirt came off, and Sigourney rolls her eyes and says, ‘There goes that shirt again.’ How often did we hear that on the set?” William Shatner, with tongue firmly planted in-cheek, said, “I thought it was very funny, and I thought the audience that they portrayed was totally real, but the actors that they were pretending to be were totally unrecognisable. Certainly I don’t know what Tim Allen was doing. He seemed to be the head of a group of actors, and for the life of me I was trying to understand who he was imitating.”

Patrick Stewart said, “I had originally not wanted to see Galaxy Quest because I heard that it was making fun of Star Trek, and then Jonathan Frakes rang me up and said ‘You must not miss this movie! See it on a Saturday night in a full theatre’. And I did, and of course I found it was brilliant. Brilliant. No one laughed louder or longer in the cinema than I did, but the idea that the ship was saved and all of our heroes in that movie were saved simply by the fact that there were fans who did understand the scientific principles on which the ship worked was absolutely wonderful.” It’s no wonder that J.J. Abrams, director the latest incarnation of Star Trek (2009) cites Galaxy Quest as “One of the best Star Trek movies ever made.” It’s with this joyful thought in mind I’ll quickly thank Cinefex Magazine #81 for assisting my research for this article, and ask you to please join me again next week when I shall discuss another dubious classic for Horror News. Until then, good night and remember, as my old friend Bela Lugosi would say, “Bevare! Bevare of the big, green dragon that sits on your doorstep – and the gifts it leaves on your lawn.” Toodles!