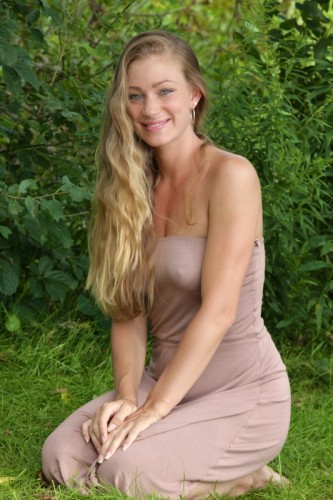 What can you tell our Horrornews.net audience about your character, Prudence?

Prudence, is a very passionate young woman, very motivated, very eager, she’s also bright, caring. She does carry a sense of innocence, yet at the same time she knows how to innocently manipulate a situation in order to achieve her goals. In this fun kooky story, she’s a woman on a mission to capture her perfect photo of Bigfoot, in order to get her degree in Cryptozoology!!! Please just sit back and have an open mind…and enjoy the ride!!

Bill Burke was such a pleasure to work with, and I really can’t thank him enough for blessing me with the opportunity to play Prudence. Prior to working on this project we had only met a total of three brief times in and out of production for his show Lingerie, which I worked one day on. Bill is an extremely intuitive man, and a very good judge of character it seems!! When we had our first meeting in regards to Sweet Prudence, he warned me that he was a GI Joe Director, which I must say at the time somewhat scared me just a little. When I learned the time frame that we had to film the 80page script, it then made sense. Bill, I imagine, is probably the only Director that would make it through such a tight time-framed project without once losing his cool!! If he did, I never witnessed it! I have so much respect for this man, he always treated all his cast with respect, he never singled any of us out, he never yelled at us, it was nothing but respect and professionalism working with Bill. On a more personal level, I truly consider him to be one of my dear friends. He has such a great sense of humor, he’s so down to earth, he’s caring, I just can’t say enough positive things about Bill.

I have to say that the whole Sweet Prudence experience was full of non-stop funny and interesting stuff. First off it was my first experience working four days straight as a character cast member on a film set, so that alone was very interesting. There were a lot of funny moments, from the first day arriving at the Nudist Resort, right until we left. I had a really great time with the entire cast, and being roommate with Albina was awesome!! We got along so great! One of my funniest memories was when half-way through one of our really long days, it was just after lunch break I remember, and we had just spent all morning shooting my really interesting experience with Bigfoot in the scorching hot sun!!

So I was extremely tired…love scenes with Bigfoot are exhausting!!! LOL. So anyway I think that day everyone was pretty tired, it was such a hot day and we had a lot to shoot!! So there’s this scene where it’s time for me to take a stand and go into the woods to search for Bigfoot, and during Prudence’s and Veruca’s conversation, I kept fluffing up the lines that were this hidden joke, I swear I just couldn’t get it right for the life of me, and it was important to Bill, and at that moment, I was feeling like the biggest failure!!! It was like everything that could go wrong during that scene was going wrong!! I couldn’t get the lines right, our main really awesome vibrator kept failing us in the scene, and then to top it off as Veruca and I are running off into the woods, her high heel brakes, she falls down and nearly broke her ankle!! Gosh, so now whenever Albina and I think back onto that part of the shoot, we just start laughing and laughing…you really just had to be there though. It was nuts!!

What was the favorite scene?

I really enjoyed the dream sequence scenes with Dirk and Bigfoot, I thought they were really funny. Also the scene where Albina’s character seduces Mike into coming on our adventure…that’s definitely one of my favorites!!

Do you think Bigfoot prefers Boobs or Butts?

I’m not sure!! It’s definitely a toss-up! LOL…I’m going to say Breasts.

How does it feel being nude in front of the camera?

In terms of nudity in front of the camera, as long as everything is done professionally, I’m comfortable with it. I know with nudity, especially within this genre there is a lot of opportunity for boundaries to be crossed, not on Bill’s set though, he would never let anything unprofessional happen, he’s very respectful and that is what made it comfortable.

What is your absolute favorite horror movies of all time? why?

My absolute favorite horror movie of all time would have to be the classic movie The Shining…why? Jack Nicholson was really good and scared the life out of me!!

My Father inspired me into acting. He’s a wonderful theatre actor, as a child I grew up watching him on stage. Still to this day I’ll go to his performances 2-3 times. Due to a lot of other priorities that I had to tend to from a young age, acting wasn’t always my focus, actually it really wasn’t until the last few years that I started to get out on auditions. I feel so fortunate that Bill presented me this opportunity to play Prudence.

Too many directors don’t take the chance with new talent, so I have so much respect and admiration for Bill for taking the chance and just going for it and doing what he wanted to do. It gave me the chance to play on-camera, and it gave me more experience, it was intense at times to be shooting pretty much 80pages in four days!! I can just imagine how much fun it would be given more time to shoot!! I love acting.

Do you have any other projects that you are currently working on?

At the moment I’m just getting out on auditions as much as I can…I can only hope some good things will be on the horizon…other than that, I like to live day to day and simply enjoy the present.

Would you like to play the role of Sweet Prudence again?

It would be a joy to play Prudence again.

Thank you so very much for the interview!!