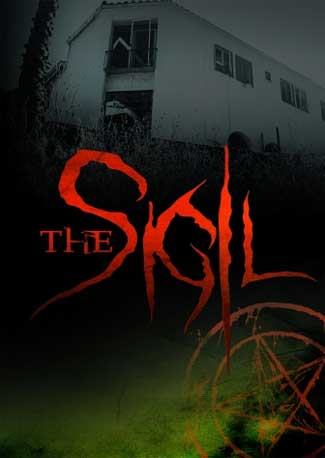 1. Where did the idea for “The Sigil” come from?

Brandon: We found this house, thought it would be a great place to shoot this horror film. It was a very creepy place. Inspired us to make a story that takes place here. We went back to Nate’s apartment and we started hashing out some ideas for a storyline. The story was very important to us – we didn’t want to do a typical hack ‘n slash horror thriller. We wanted to do something different.

Nate: The first time we went into the house for locating scouting, Brandon was freaking out. I think he was scared or something. He made me arm myself with this long wooden stick and walk in front of him, just in case something jumped out.

N: It’s true. It’s hard to understate how creepy the house was in there. I remember we were checking out one of the bathrooms, and there was this loud boom, shaking the walls. Brandon almost pissed himself. We got out of there as soon as we can. And that really inspired the location of the story and lent itself to some great ideas using the found footage technique.

2. If you narrow it down to watching one horror movie from your childhood that got you hooked on the horror genre, what movie would that be?

B: I like The Blair Witch Project, but I also liked The Exorcist. That film was just epic, it was terrifying. It wasn’t even about the story, but the content. It had ground-breaking special effects for the time. And that’s what we like to think of The Sigil as. Ground-breaking filmmaking by combining these two film perspectives- 1st person and 3rd person – and up until this point, they’ve been separated in films. But we wanted to push the conventions of film.

N: Leprechaun. The first one. I think I was like 11 or so when I first saw that movie. I don’t remember being intensely scared, but something with the movie stuck with me. I remember I had a nightmare that night that the Leprechaun was living down in my basement, and every night the house would be dark except for the light emanating up the stairs from the basement. That little thing was so devious and creepy and killed people in nasty ways. I think that was the only nightmare I’ve ever had from a movie. Maybe The Sigil will give people nightmares! We hope.

3. How did you get started in the business of making movies?

B: I always liked telling stories. I used to be in theatre, doing a lot of acting. Then I did my first short film, and I instantly fell in love with the medium. I found a lot more control, but also a lot more freedom in expressing myself with film. So I went on to UC Santa Cruz and graduated from the film department. I just love making movies.

N: I came from an acting and theatre background as well. My training and degree from UC San Diego was in all in Theatre. The film department was not very developed at UCSD, so I didn’t get a real opportunity to experience film. Once I graduated, I knew I wanted to move to LA and pursue film and television acting primarily. I considered going to New York and doing theatre, but I had some connections in LA already. After I moved to LA, I started acting in a lot of short films. I got an agent, lost an agent, got another agent, did that whole thing for a bit. Brandon cast me in a couple of his short films over the last few years, and we got to know each other more in a collaborative sense. Once he moved to LA, we decided to officially create triple d productions. Triple d was a name we had been working under for a few years, but now we decided to truly unite together and make movies. I also have a playwriting background from UCSD, where I had four of my plays produced. I hadn’t ever written a screenplay before The Sigil though, so it was a great learning experiencing. And being a producer on a film for the first time, and truly seeing all the hard work and time and resourcefulness needed to make a feature film.

4. Who or what inspires your creativity?

B: I’d like to think locations inspire my creativity, especially when it comes to story-telling. It’s just easier for me if I can set it somewhere. The Sigil was inspired by the location, as were a bunch of my previous shorts.
I also put a lot of weight in the auteur theory. Directors really guide the vision of the film, so I’m a huge fan of Paul Thomas Anderson. There Will Be Blood was a masterpiece. Hitchcock, Michael Mann, Soderbergh, Sam Mendes all have their own styles and looks too. All distinct.

N: For work ethic and career, Steven Spielberg. He’s had such a long and diversified career. He goes from shorts, to television, to features, to producing. Now he’s a brand- he doesn’t have to be physically involved in the project, just by name. He has a hand in everything. All different types of stuff too, different genres and mediums.
For sheer creativity, concepts and uniqueness inspire my writing creativity. When I sit down to write, I think about what makes this story unique? How are these characters different from all the other characters out there? Why care about them? My best writing and ideas have come from combining opposites to create conflict. In The Sigil, a good example of this can be seen early on with Nate’s character. He’s a little bit of a rough-shod character who probably has never worn a suit in his whole life. But now he has to dress up and go to Devan’s brother’s wake and somehow find a way to comfort this girl, whom he can’t even express his true feelings for. He’s out of his comfort zone, and I like to put characters in that situation. 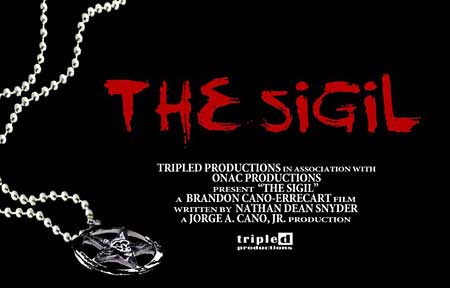 5. Do you think “found footage” movies are getting old or just getting started?

N: Definitely just getting started. Funny I just mentioned Spielberg, because he said the same thing when he was tele-conferencing on The River. There’s so much potential still out there for the found footage genre, and I think it gets a bad name or reputation when it’s used as a gimmick. It has to serve a story. That’s why I think The River was a compelling and unique spin on the genre, and The Sigil too. People might say it’s a worn out and old genre, and I think that stems from being exposed to so much re-hash. If it’s a good story, the first person narrative will compliment it.

B: Yeah, same here. They try and scare you, but not really frighten you out. It’s all jump scares and slasher. I’ve directed comedies and dramas, even a Western, but never a Horror. I saw it as an opportunity to challenge the genre.

N: One of the characters, Brandon – he wants to document the group’s experience travelling to and visiting the house. He hopes it will bring him exposure in documentary film festivals as a filmmaker. Nate sees the documentary as possible proof against the government conspiracy. And Devan doesn’t really care about the film at all – she just wants closure to her brother’s death.
When our heroes go into the decrepit house, everything inside the house is in first person, documentary camera style. We never see any other perspective beside Brandon’s. Then outside the house we transition back to the 3rd person, and we layer/weave in snippets of first person depending on whatever Brandon may be rolling on. It’s also unique in that it’s not graphically bloody, or for the attention-challenged crowd. There’s dialogue and development.

B: It’s not your typical horror. Yes, there are jumps and scares, but it also an interesting story, a mystery driven by each of these characters. Also it’s part of a larger series. We had a bigger story in mind that we couldn’t tell in an hour and a half, so we broke it into four distinct films – two sequels and a prequel. We plan on telling the whole story of The Sigil.

7. What was the biggest challenge you had making “The Sigil”?

N: What hasn’t been a challenge?

B: Making pizzas. Crafty. One night we actually burned 3 sets of pizzas, 3 different times. Each time someone either forgot or was helping in production and was too late. We ended up just ordering Dominoes.

N: Seriously, we were very ambitious for such a small production. It was only a handful of us making the film. During production I was watching budget, footage, organizing cast, adjusting the script, picking costumes, getting props, memorizing my lines, running lines with the other actors, dressing the set, doing makeup – everything.

B: Meanwhile I’m over there lighting, setting the shots, setting crew, rehearsing actors and since I acted in it, I also was running lines and getting in costume – a lot of little details to think about, while still maintaining the overall vision of the film.
We had a ton of challenges in post as well. For examples, our sound designer and composer lives in Boston, so we had to go back and forth a few times. It takes some time to send an 80 GB video file. One of the actors lives in Santa Cruz, so we had to go the extra mile to schedule pick-ups and ADR sessions with her.

B: Don’t ever go in that house…

N: It’s a line of dialogue from one of the characters. Pretty much sums up the film.

9. If your movie ran as a double feature, what movie would compliment it?

B: Grease. No, I’m kidding. Something like ET. A movie with a theme of friendship, some supernatural, some suspense. It wouldn’t have to be in the same genre necessarily.

N: The first Paranormal Activity. I really liked the original, and thought it took the genre in a whole new place. The others after that haven’t really distinguished themselves from the original. Also I like that PA doesn’t get real super shaky and out of control with the camera like Blair Witch, where the shaky found footage is hard to watch or see. Paranormal is more controlled and selective, and still uses the found footage. We didn’t want The Sigil to be a shake-fest. We like a balance where it’s still a bit rough, but it’s not so shaky where you can’t see anything. It builds suspense this way, in place of making you nauseated. So if you saw Paranormal before The Sigil, your vision would be all warmed up.

10. If I just walked out the movie theatre after watching “The Sigil”, what words would you want to hear come out of my mouth?

N: “I have to tell my friends to come see this film!”