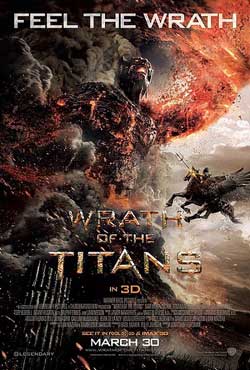 Perseus braves the treacherous underworld to rescue his father, Zeus, captured by his son, Ares, and brother Hades who unleash the ancient Titans upon the world.

It may surprise some of my acolytes to learn that the Black Saint is a big fan of videogames, a very big fan indeed. As a matter of fact I have been an ardent gamer since the 70’s when the Atari 2600 made it’s debut & one of my favorite games (Baseball) was comprised of 4 squares against a green background that flashed an awful lot whenever something moved onscreen. Nowadays it looks so realistic that if looked at from a distance or out of the corner of your eye, you’d think you were watching an actual baseball game. Why do I bring up videogames when I’m supposed to be telling you about “Wrath Of The Titans”? Good question! And I’ll get to that answer in a few paragraphs. Right now let’s talk about the movie for a little while… 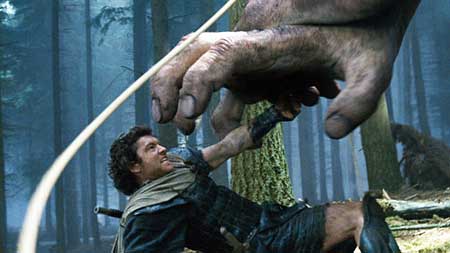 “Wrath Of The Titans” (WOTT from here on) is the sequel to 2010’s “Clash Of The Titans” which was a remake of the classic film that was stop motion effect master Ray Harryhausen’s last film (1981). It continues the story of Perseus (Sam Worthington) who is enlisted by his father Zeus (Liam Neeson) in a battle against Hades (Ralph Fiennes) & Ares (Edgar Ramirez) who have conspired to release the titan Cronos (Who just happens to be dad to both Zeus & Hades) from Tartarus, a prison located deep in the underworld, to wreak havoc on the universe. In turn Cronos has promised them eternal life. Now why would gods need a promise from one as dangerous as Cronos in the first place? Aren’t all gods eternal? Apparently not as mankind has stopped believing in the gods as much as they had in the past. Hence, fewer prayers to them & as gods get their power from prayer in the first place they’re growing weaker every single day. 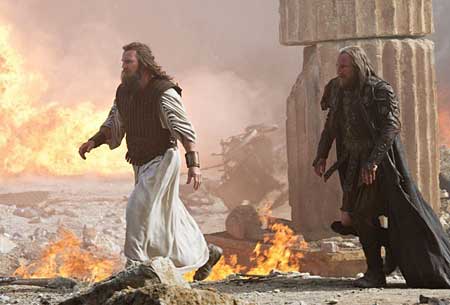 Perseus, a demigod (Half god, half mortal) is the only one that has the ability to help his father as the other gods have already fallen. Initially he spurns his father’s request as he is happy being a simple fisherman & raising his son Helius (John Bell). But Zeus sends Perseus a vision of the catastrophe that Cronos would create if released from his prison & relents the following day. Zeus tells him that he must find the one other demigod, Agenor (Toby Kebbell) to help him complete his mission. But Agenor is imprisoned by Queen Andromeda (Rosemund Pike) for thievery & Perseus must persuade both Andromeda & Agenor that the threat is real and their assistance is necessary to save the known world. 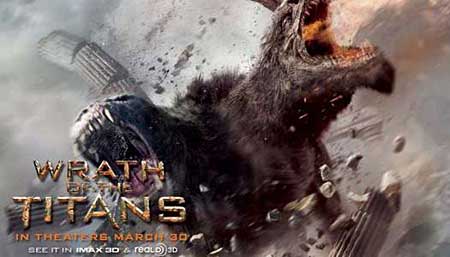 As it turns out, Agenor is the son of Poseidon (Danny Huston) although he doesn’t really seem to care about his lineage one bit and once released (For the price of his weight in gold & the fastest ship available) he reluctantly agrees to take Perseus & Andromeda to meet Hephaestus (Bill Nighy) who created Tartarus & knows the only way to enter the underworld where Zeus is being drained of all his godly powers by Cronos in order to give him enough strength to escape, along with his army of titans & destroy everything. 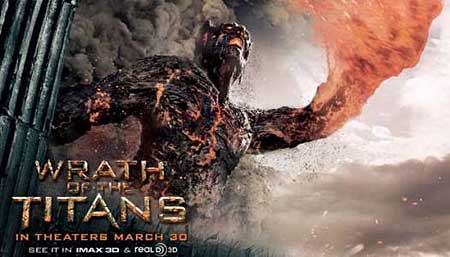 Now about the videogames, I am a big fan of the “God Of War” series of games. I think they are visually arresting, exciting to a fault & just an all around blast to play. If you are at all familiar with these games (Especially “GOW 3”) then you’ve already seen “Wrath Of The Titans”. In my eyes this movie could be re-titled “God Of War: The Motion Picture” & not be too far off the mark. The visuals between the two are almost interchangeable and this isn’t a bad thing mind you, the effects work in “WOTT” are really impressive. I’m just saying that I’ve seen them before and I was controlling the action on my TV. There’s no way that the visual effects in this film weren’t influenced by the “GOW” videogame series, especially the character of Cronos who is depicted exactly in the film as in the game. 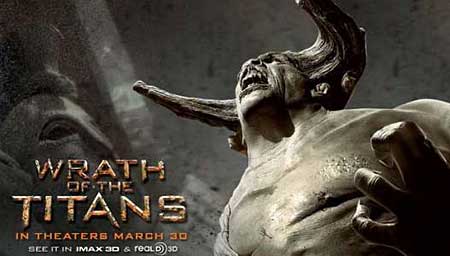 The performances of the principal actors is pretty standard for this type of film. I swear they make these films every so often just to give some big name British actors who have a stentorian tone to their voices a nice paycheck. Actors like Neeson, Fiennes & Nighy can do this sort of stuff in their sleep. Sam Worthington is a perfectly adequate choice to play Perseus but he comes off as bland here, his Australian accent doesn’t help either. He kind of reminds me of actor Ken Marshall, do you remember him? He starred in a film called “Krull” back in 1983 & the television mini series “Marco Polo” in 1982-83. He was the next big thing for awhile but he faded away into obscurity not long afterwards. Not that I think that Worthington is going anywhere but he gives off that Ken Marshall vibe to me and do you remember “Man On A Ledge”? Yeah, I didn’t think so. He starred in that one a few scant months ago but it came & went pretty quickly. He doesn’t seem to be the star of his films to me. “Avatar” starred James Cameron I don’t care what anyone says and Worthington was a big blue animated alien for 3/4 of that movie. Audiences go to see films like “Clash Of The Titans’ & “WOTT” for the special effects, not Worthington. The best performance in the film comes from Kebbell who plays Agenor as something of a wiseguy, seemingly winking at the audience after every line he recites. He has a lot of fun here and adds a bit of levity to what are some seriously dour proceedings. 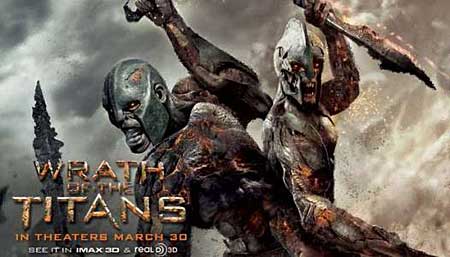 “Clash Of The Titans” was vilified by audiences for an extremely shoddy 3D conversion that literally gave audiences headaches as they watched it. “WOTT” doesn’t have those issues. But the 3D presented here is nothing to write home about either. There are some cool burning embers that are “Floating” around every so often but besides them there aren’t any real stand out 3D effect sequences that merit any mention. The film would look fine in 2D so there is no reason to shell out extra cash for 3D unless you want to. The best looking sequence in the film for me was the Cyclops sequence as I thought they had some tangible heft to them & they didn’t look too stiff or cartoony. 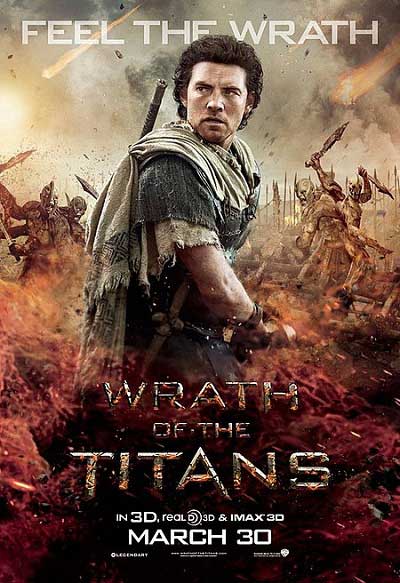 So should you see “Wrath Of The Titans“? If you’re a fan of this type of movie then by all means you should. It isn’t a bad movie at all, it’s well edited, shot & it certainly moves along at a brisk clip. But it isn’t necessarily a must see either, you can wait for it to be released on DVD/Bluray & not be missing too much. That being said, I feel comfortable rating it 2 1/2 out of 5 shrouds. Neither a must see or a must to avoid, it is a painless way of spending 90 minutes at the theater.