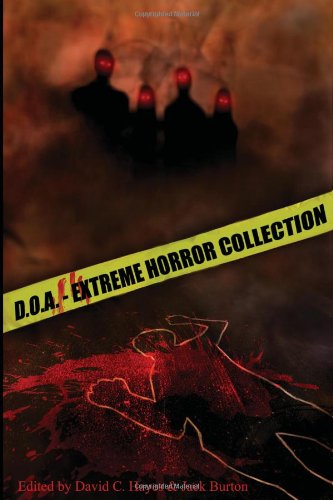 Full disclosure: I submitted to this anthology and was rejected. On the other hand, my wife, who allows me access to all her soft and naughty bits, has a story on display within its pages. My hope is that the two cancel each other out and leave a relative sense of objectivity to my review. Just wanted to warn you.

Any time you call something “extreme” or “shocking” or any of those clichéd catch-phrases, you have to be careful. After all, we live in an age already bored by Goatse and willing to shrug off the latest foulness to ooze from /b/. In horror, we’ve experienced. Barker and Deveraux, Ellis and Lee, and walked away giggling about the myriad uses of peckersnot and a hungry rat. The Splatterpunk and Hardcore movements have come and gone and seem to be making a resurgence, so you’ve got to come pretty hard to surprise us. With that in mind, D.O.A. does not live up to its Extreme tagline or the rather silly disclaimer on the back, but it does have some pretty damn entertaining yarns held within.

I expected Edward R. Rosick’s “Cold Air” to be a cheap rip off of Lovecraft’s “Cool Air” but instead found an interesting take on the vampire mythos wherein it isn’t so much that the blood is the life as the sexual organs. Kinda makes you wonder if eternal life would be worth the necrophilia. Opener “Cherry Clubbing,” by Kenneth Yu managed to get past the rather forced feeling second person perspective to deal with the underground markets that would inevitably arise if the creatures of fable and religion were found to be real in a way that caught me a bit off guard. Also, Tonia Brown did some neat things with the Sin Eater mythos in the course of “Sickened”.

However, special notice needs to go to Chad Mckee’s “Cena” and JW Schnaar’s “Frogger.” The former deals very personally with the problems of tourists inserting themselves and their values into cultures they do not understand. It’s fraught with honest fear confusion that bleeds from the page. The latter, a short and sweet tale of Atari inspired revenge, delivers a marvelous sharp punch. Adrian Ludens also deserves a high five for the nod to a favorite scene from American Psycho that left me giggling like a schoolgirl.

If only they were all so good. “To Be Filled In by the Subject”, by J. Grant, seemed to be nothing more than a laundry list of tortures attempting to excuse itself as a story via presentation as experiment notes. I couldn’t finish Chris Reed’s “Sisters” because the faux-gangsta dialogue was too painfully inorganic to choke down (I haven’t heard anyone say “homeboy” in any sense of seriousness for a good couple decades and that isn’t the worst of it). With “Glutton for Punishment”, Robert Essig delivers a morality tale that is a bit too on the nose and blatant for my tastes and Micheal Bracken’s “Les Sperme Vampire” simply reveals and explains a type of vampire (guess what it feeds on!) without a story to give it context or meaning.

That said, the big winner, if you want to call it that, on this side of the coin is “A Laxative for Writer’s Block.” There is a place, time and even value for stories featuring the rape of children but it has to be handled delicately and, more importantly, with purpose. Forest Ingle, on the other hand, presents neither of those in the course of this tale and manages to ruin an otherwise thoroughly joyous introduction. Worse still, he violates the gods of continuity and word choice by mentioning the “bush” on a girl who had previously been described as totally hairless.

Overall, while none of the stories meet the hype of the title or back page gag, D.O.A. still manages to deliver some quality tales from people worth keeping an eye on in the future.