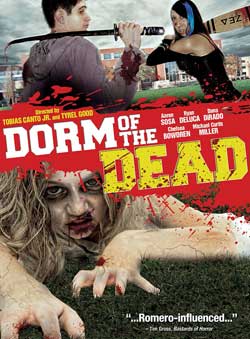 At Arkham University, campus bitches Clare and Julie have a score to settle with goth chicks Sarah and Allison. And when Amy accidentally unleashes a campus zombie epidemic, Clare picks Sarah as the perfect candidate to join the walking dead! But things have a way of backfiring. . .don’t they? So don’t be surprised if Clare and Julie wind up on tonight’s menu!

In an attempt to make an ‘of the dead’ sequel, a college unites to make a pretty solid film. A group of students band together when a sickness spreads from dorm to dorm that turns the campus into a zombie infested war zone.

The movie jumps off with a quick kill of the RA (resident assistant) who has confiscated the protagonists’ bong. It then cuts to a later scene where the main character returns from a night of partying and finds his younger brother waiting in the common room.

He pawns him off on his roommate and goes off to class and then meets up with his friend as people start dying around him unbeknownst to him. When he returns, his brother bursts in to wake him and they find the other side of the campus on fire.

Now for a low-budget independent student film this is surprisingly good. The script, and character development was solid, even though it lacked in a few areas. This struck me as more of a comedy than a horror film even though it is trying to shoot for an ‘of the dead’ Romero style of movie. Most of the dialogue is pretty funny and the actors do a decent job with their timing.

The plot holes are tougher to deal with when part of the group stops to hold off a horde of zombie that they could have easily all ran away from or where people stand around and discuss the imminent danger in front of them. The production value is great for a student film and the acting is good by majority of the cast. Though it does lack a few elements of something that could be screened outside of their campus. I have seen worse on Netflix, though.

If you stay until the end of the credits they show a glimpse at the next installment and I think that we could expect great things from these kids if they stick with it. I only wish they kept the pace and tension of that final scene throughout more of the actual movie. 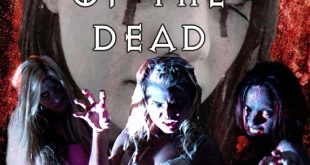 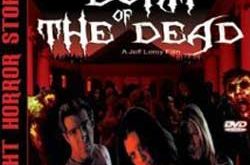