Home | Free screening of ‘The Raid: Redemption’ in NYC

Free screening of ‘The Raid: Redemption’ in NYC

My good friends at FANGORIA Asked me to pass on the details of a free screening of an INCREDIBLE film called “The Raid: Redemption” that will be taking place in NYC on March 14th. Any & all of my devoted acolytes who are in the NYC area should do their best to make it because this flick is AMAZING! Here are the details & a quick synopsis!

FANGORIA will host a free screening of the award-winning Indonesian action thriller THE RAID in New York City, hosted by director Gareth Evans, who will also conduct a Q&A. The special event, taking place Wednesday, March 14 at 7 p.m., will be held at New York City’s Cinema Village (22 East 12th Street, off University Place). See below for more details and pics.

The Fango screening of THE RAID will be a free show; to obtain tickets, send an e-mail to fangoriascreening@gmail.com . You must list “THE RAID” as your subject line. Offer is good for you and one guest. Names will be checked at the door. Offer is first come, first served, and we will confirm your RSVP. Seating is not guaranteed, however. This advance preview is presented by Sony Pictures Classics, which will release THE RAID theatrically March 23.

A hit at 2011’s Toronto International Film Festival (where it won the Midnight Audience Award), this year’s Sundance Film Festival and the Dublin Film Festival (winner of Audience and Critics awards), THE RAID follows Rama (Iko Uwais), a member of a Special Forces team that arrives at a rundown apartment block with a mission to remove its owner, a notorious drug lord. The seedy building has become a sanctuary to ruthless killers, gangs, rapists and thieves seeking accommodation in the one place they know they can’t be touched by the police. When a spotter blows their cover, Rama and his men must fight their way through every floor and every room not just to complete their mission, but to survive their bloody ordeal.

Reviewing the film, Quint of Ain’t It Cool News said, “THE RAID feels like someone put John Carpenter’s ASSAULT ON PRECINCT 13 in a blender with ONG-BAK and hit puree!” Devin Faraci of Badassdigest.com noted, “THE RAID is one for the pantheon, a truly great and amazing action film that will be revisited for generations. It’s an action masterpiece.” And Peter Sciretta of Slashfilm.com commented, “I had no idea how hard my ass was going to get kicked by this Indonesian action movie. This is the best action film I’ve seen in years.” Finally, after seeing THE RAID, Robert Koehler of Variety wrote, “…viewers will wonder how the amazing battle that just ended could possibly be topped. But it is, again and again.”

With THE RAID (see official website here), Fango offers you the perfect actionfest to get your heart racing and adrenalin pumping. Watch for an advance review and Evans interview on this site soon. See you at the show on March 14!

I implore all of you in the tri state area to get your tickets quickly because this one promises to pack the house! Come on down & meet Tony Timpone of FANGORIA & who knows? I might be lurking in the shadows as well…. 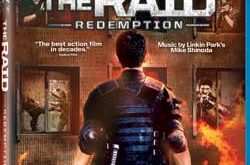