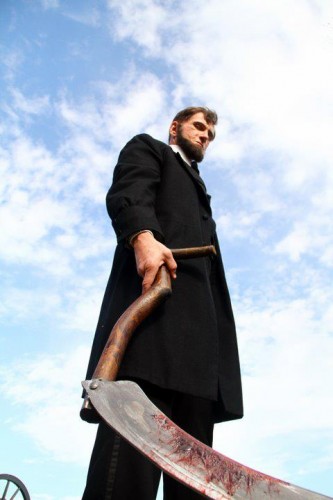 A: Producer David Latt, one of the co-founders of The Asylum, asked me to do it. When David Latt calls, actors answer.

Q: How much research went into playing the role of President Abraham Lincoln and what books or movies went into that research?

A: I had played Lincoln before onstage in my touring theater days, so I had a good deal of research material in my head already. When I got to set and the director Richard Schenkman said to me, “I want you to play it straight – I want the Lincoln of history,” I knew I was good. Richard also
wrote the screenplay and he cleverly mixed in a lot of Lincoln’s actual words into the dialogue. So in my mind, I was playing our 16th President. He just happened to be slaughtering the walking dead with a bloody farm implement but other than that….

Q: Do the Civil Wars facts in Abraham Lincoln vs Zombies hold true to the history books?

A: Yes, they do actually! And that’s what I thought was very clever about the script. I mean, yeah, the premise is ridiculous, but if you buy the fact that the dead are walking, this is a very plausible scenario of how Lincoln might have handled the problem in the midst of The Civil War. I love alternate history; Harry Turtledove and all the rest; and this was as much alternate history as it was horror.

Q: Hmmm, Do Confederate Zombies only go after Union Soldiers?

A: Oh hell no! They will eat whatever is at hand. Sometimes even each other. Just like actors.

Q: This movie, Abraham Lincoln vs Zombies and another movie Abraham Lincoln:Vampire Hunter both portray the former President as a Horror Action Hero. Why do you think the recent interest in bringing President Lincoln into the horror genre? 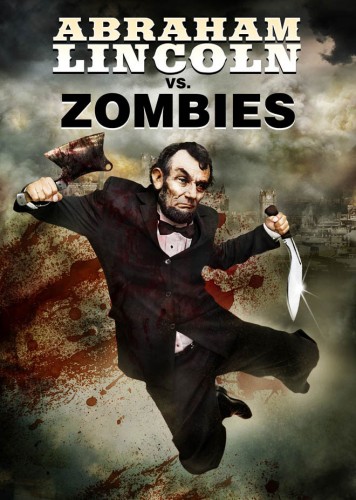 A: Abraham Lincoln is the guy who could never be elected today, but whom we desperately wish we could elect. He’s resolute, honest, has the best interest of the nation at heart, and he’s as ugly as homemade Sunday sin, so he is modest, too. I’d vote for that in an undead heartbeat. Lincoln was a melancholy man, so he had a dark side that appeals to horror fans. Once, when he had received a report of many thousands of Union casualties, he stared off into the high ceiling of the White House’s East Room and muttered, “The blood…can you not see the blood? It is rising…my God it will drown us all!” Now that’s a dark warrior for you. Epic stuff.

Q: Where was Abraham Lincoln vs Zombies filmed?

A: Principal photography was in Savannah, Georgia, where locations included the historic (and reputedly haunted) Fort Pulaski. There is also green-screen post-production work being done right now here in Los Angeles at The Asylum.

Q: What can you tell us about the Curse of Savannah?

A: When David Latt called and asked me to do this role, he mentioned that a resident of Savannah had anonymously sent the following e-mail to The Asylum: “I place the curse of Savannah upon your head and may it follow you the rest of your life if you make this film here. You have been warned.” So when I got to Savannah I asked some of the locals who worked on the film about the curse and they all laughed it off. Except this one old gypsy woman who pointed her finger at me at said “Thinner!” No wait that was a movie. I get mixed up. Seriously, maybe there was a curse. I did come close to actually slicing a zombie actor’s neck with my bloody scythe. Twice. And I threw my back out doing a jump onto a stunt pad. I wonder…

Q: What was your proudest moment from making Abraham Lincoln vs Zombies?

A: I had an ad-lib floating around in my head that I was waiting for the right moment to use. The dialogue Richard Schenkman wrote was all very in character and true to the period, which I loved, but I had this one ad-lib I was aching to say….so I waited until it was a greenscreen shot and Richard seemed relaxed and just when Lincoln’s bloody scythe is connecting with a zombie’s head I growled out “Emancipate THIS!” And Richard said “Let’s keep it. Do one without it but let’s keep that as an option.” I was a happy Lincoln.

Q: How do the zombies hold up to other zombie movies… fast – slow – smart –dumb?

A: Yes, yes, yes and yes. They had a zombie school for the zombie actors which I wasn’t involved in. But I saw all of those types in my scenes with them. The thing that weirded me out was that we had some really young zombies in the mix. That’s creepy, you know?

Q: If I interviewed President Abraham Lincoln ( and not Bill Oberst Jr. ) what would he says about fighting zombies?

A: “My fellow citizens, we cannot escape history. The fiery trial through which we must pass will light us down in honor or dishonor to the last generation. And so, with malice toward all and charity for none, let’s do this.”

(I only added “let’s do this,” the rest is all Lincoln. See? He is a ready-made action hero!!)

Q: Everyone knows Bill Oberst Jr. is the hardest working man in horror, what other horrors are in your future?

A: “The hardest working man in horror?”
Thank you! That label makes the German in me smile. I have 10 flicks in post and am shooting 5 more between now and August. I’d invite folks to check out my IMDb page www.imdb.com/name/nm2454994/ to see what’s up. I do have two horror films ready for release that I am especially excited about. Both are feature films coming this year:

Jourdan McClure’s Children Of Sorrow is in post.
www.imdb.com/title/tt1942828/
I play the notorious cult leader Simon Leach who killed all those kids in the desert. McClure’s other 2012 release horror film Rouge River stars Bill Moseley so I was honored to work with him. I dove into the role of Simon Leach. I had done a film just before this that I knew I had sucked in. I was kicking myself for taking that role and ruining that film. So for Children Of Sorrow I punished myself – cut off the world and lived in this psychotic place for the whole shoot. I hope it paid off. The composer says parts of it make him feel sick to watch. We tried for a cringe-factor that springs from being unsettling rather than buckets of blood. There is mental rape, physical violence and a high “eww” factor. Jourdan McClure described it to me this way: “Watching Children Of Sorrow is like walking in on your parents having sex. You try to turn away but the memory of what you saw never leaves you.”

Michael Emanuel and Bob Badway’s Scary Or Die
www.imdb.com/title/tt1833879/
stars Corbin Bleu of the High School Musical franchise. It’s Corbin’s first horror film. Scary Or Die is a return to the anthology format ala Creepshow and it really succeeds in being fun and scary at the same time. I’m in the opening story; I play a racist xenophobe who shoots Mexican immigrants until he discovers that he may not have the (insert Uncle Creepy laugh here) guts
for the job. It was a fun shoot with friends and a lot of former co-stars in other flicks; Corbin, Domiziano Arcangeli (of House Of Flesh Mannequins,) Liz DiPrinzio (of The Culling – I tried to molest and kill Liz in The Devil Within,) Maxie Santillian (Mr. Foo from Nude Nuns With Big Guns, who gets done by an avenging nun right after I’m dragged off her naked body and beaten to death with a baseball bat,) Corbin’s dad David Reivers (of Desperate Housewives and 24) and the marvelous and sexy-classy Shannon Bobo (of Bloody Mary 3D.)

In my non-horror life I am a recurring character in a series of Hallmark Channel movies, and I shoot the next one of those in March. Then to New York in April to do the lead role of a Vietnam vet on the edge in Heather Ferreira’s raw and dark feature film The Little Matchstick Boy, which she is shooting with the support of Taxi Driver crew alumni who think her script is a modern-day version of that classic. Then to St. Louis to do the lead role of an insomniac writer in Trevor Juenger’s art-house horror film Coyote (which, by the way, includes some of the weirdest imagery I have ever seen in a script, including dogskin headgear and a nude woman sucking on an insect thumb.) Then back to LA to do the lead role of a seasoned hitman in the feature film version of Mike Bonomo’s well-reviewed short film Assassins. Then finally back to horror in the lead role of a writer with scarred memories in Gregory Blair’s feature film Scare Tactics. That takes me through August. But then what? Keep in touch at www.billoberst.com  or drop me an e-mail. I love to hear from horror fans, because I’m one too.