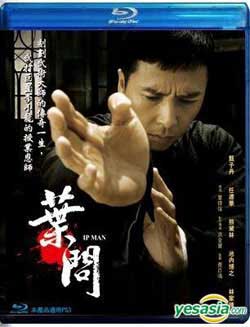 A semi-biographical account of Yip Man, the first martial arts master to teach the Chinese martial art of Wing Chun

When I was asked to review “Ip Man”, I didn’t hesitate to say yes. Having watched the film a couple of times over the past year, I still can’t contain how much I actually love this film. It had been a while since I found myself drawn into the characters and still be completely blown away by the films fight choreography, done be legendary Hong Kong star Sammo Hung and Tony Leung Siu Hung. Donnie Yen, a staple of the Hong Kong film scene since the mid-80’s has soared in films like “Tiger Cage 2” or “Iron Monkey”, slummed in “Highlander:
Endgame”, or been overshadowed by the likes of Jet Li in “Once Upon a Time in China 2” and Jackie Chan in “Shanghai Knights”, but wasn’t until 2005 when his first collaboration with director Wilson Yip (the superb “S.P.L .” aka “Kill Zone”) that Yen had found a director who could utilize his talents as well as push him to be one of the most talented actors working within the genre today.

The film starts in the mid-30’s in Fo Shan, China, a place that is proudly home to many different martial arts schools. Everyone knows that Ip Man (Donnie Yen), is by far the best. But Ip, takes no students and lives a mild mannered life, a very humble man. He comes from a rich family and money was never an issue.

He spends his days with his wife and son, or sparring playfully with the other local martial artists. Things take a much darker turn when we move ahead to the Japanese invasion of Fo Shan. The Japanese soldiers turn the place upside down and Ip Man loses his money and home. His family is forced to live in a shack and on the brink of starving until Ip finds a job in a coal mine with the help of a friend. General Miura (Hiroyuki Ikeuchi) takes fighters from the coal mines at pits them against his Japanese fighters and if they win, they are given rice to feed their families. Ip knows nothing of this until his friends are murdered. Ip goes on a rampage to seek revenge and to uphold the dignity of the Chinese people.

Aside from the spectacular fight sequences, what sets this film apart is how Ip Man is portrayed. I didn’t mention this before but the film is semi-autobiographical. The real Ip Man is best known as the man responsible for bringing respect to the art of “wing chun”, as well as the teacher of a young man named who later became known to the world as Bruce Lee. Many liberties were taken with his story but the spirit of what he believed in thrives in the film.

Yen’s portrayal drives the film. The first half he is humble, mild mannered, a true believer in his art, and a family man. With his money he gives back to the people and when he loses it all, his spirit still thrives. It is obvious that the man was looked up to and the filmmakers make him a true hero.

The films first half is more playful, evident within the fight scenes. After the Japanese takeover, when Ip learns that his friend was murdered by them, he demands to fight ten Japanese fighters at once, and that scene is a turning point. We see the characters dark side when his rage explodes and the fight is just relentless. What is important is that he is able to balance and control his rage by holding on to his beliefs and being proud of who he is.

The film is first and foremost a martial arts films and every action scene delivers in spades. The main characters are well developed and Yen is surrounded by a great supporting cast of newer faces, like Lynn Hung, as well as seasoned veterans like the always reliable Simon Yam. At 107min, the film flies by, with near perfect pacing between story and fights. I will even go on record as saying that “Ip Man” is a contender for being one of the best martial arts films of the past decade.