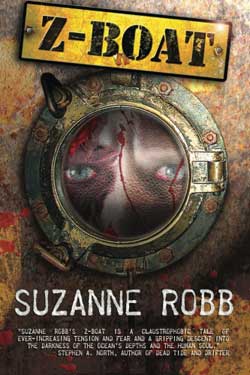 Suzanne Robb’s Z-Boat is a novel based in the future wherein the Earth has been severely ravaged due to pollution. There is no clean drinking water in site and the rest of the world’s resources have been severely depleted. Even the sun’s rays are blocked by a layer of smog, casting a dark shadow over the Earth. The only way to salvage humanity is to explore the depths of the ocean for necessary resources. Contracted by a secret group of companies, the crew of the submarine Betty Loo is on a covert mission to rescue a previous mission’s submarine. The crew is aided by several other mysterious people to embark on a mission they have little information about. The money is too good to pass up but this crew may be paying a heftier price.

This was a very easy read, as there was no rambling or use of overly complex language. Z-Boat is the kind of novel that you can pick up at any time and dive right into. The characters were very well developed and the personalities ranged from sociopathic to stoic to the boy-next-door type. Having so much diversity of characters created an intense and “powder keg-like” atmosphere. With an alcoholic captain who doesn’t command too much authority, a pilot who’s a secretive “wonder woman” with her blue collar mechanic boyfriend, a not-so-lady-like and pudgy gambling diver, and the old man who created the Betty Loo, this hodgepodge of Betty Loo regulars have a surprisingly perfect chemistry. These regulars have a very hard time getting used to, or even trusting (with good reason), the new crew sent to them. This new crew is a secretive bunch of scientists, doctors, pilots, divers, and mission leaders who don’t seem to care much about getting to know the crew of the Betty Loo.

I’m not sure if she’s been in one before or if she’s done a lot of studying up on them but Suzanne Robb did an excellent job of detailing the submarine. Due to the thorough description of Betty Loo, I was able to picture in my mind just how everything looked. The atmosphere was very isolated as the characters were basically sitting in a hulking metal machine in the dark depths of the ocean. I began to feel almost claustrophobic as I read about the Betty Loo.

I liked the fact that, as the reader, you knew that the crew was heading straight into a gruesome and dangerous situation, but the regular crew is not quite aware of this fact. As the plot progresses, many of the regular crew members start to catch onto the potential for danger as well as the lies that they are being fed by the new crew. The mistrust they have for one another grows as they descend farther into the oceans depths. It’s almost as if the deeper they go the greater the tension becomes, similarly to the pressure put on the Betty Loo as she descends to depths greater than her means.

This book has a good plot, interesting characters, suspense, and gore; all of the things that I believe make for an excellent horror novel. I really couldn’t find anything wrong with this book. I found myself often unable to put the book down as I wanted to find out what was going to happen next. There were many unexpected moments in the book creating much excitement for me as I read on. This author really knows how to capture, and hold, the attention of the reader. This reviewer highly recommends Suzanne Robb’s Z-Boat to anyone looking for a good and suspenseful read.