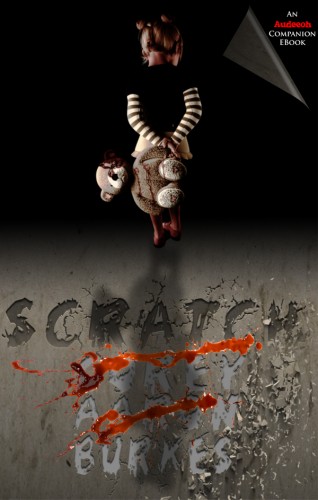 In looking back over my reading of ‘Scratch’, I couldn’t have picked a more perfect evening for it. It was late, dark, and there was a thunderstorm outside, just like the pivotal scene in the story itself. Fortunately for me, however, there was no demon in my house!

‘Scratch’ tells the story of Keilee-Ann, the 4 year old daughter of Erica and Marvin. The family is having financial issues and the disconnection and foreclosure notices are piling up. Marvin, having had one too many arguments with his wife in front of their daughter, does something drastic (that only he knows what) and from one day to the next all their bills are caught up. While not knowing what Marvin did doesn’t sit well with Erica, it becomes even worse when the phone starts ringing incessantly and Marvin refuses to answer it. It takes her answering it before they find out the bad news: they have 24 hours to repay the debt.

Leave it to Marvin to find the one loan shark who sticks to his deadlines. At the stroke of midnight the Debt Collector is standing outside their house. With him, in a locked cage, is a demonic creature that is let loose on the house to usurp lives for cash. The parents might have been easy prey for it, but Keilee-Ann doesn’t play like that and now this “boogie man” is in for more than he expects on this stormy night.

I enjoyed reading ‘Scratch’ but found myself nitpicking on two items in particular after my first read. My biggest issue is with how the parents and the demon interact. There are a full 10 pages of build-up over the debt, the phone calls and the Debt Collector and his demon, and they work decent enough telling the story. But it is less than one page of text that describes the demons encounter with the parents. Being that the parents are not read about again for the rest of the story but are such key figures early on, this seemed particularly short to me. Also a little more description on the demon would have been nice. To say “it was a great white shark on land” with “piranha-like incisors” but then later describe it having a “clawed paw” doesn’t bring to mind a horrifying looking creature, but more of a caricature. I’m sure in the authors head it looks amazing (in mine, I pictured it more panther like and the story worked well with that).

That aside, however, and the rest of the details are positive, including a very likeable protagonist which you can’t help but root for, solid storytelling and half a book of non-stop action once the demon enters the house.

At just around 21 pages in length for the actual body of ‘Scratch’, the story itself is short but the eBook has a few extras that make up for it. My favorite was a re-telling of the story in screenplay format which has an alternate (and in my case, preferred) ending. Additionally, YouTube links to audio presentations of several of the key scenes are scattered throughout (these links did not work on my Kindle Fire but worked fine on my desktop). I think the ambient sounds of Audio Scene 5 was the best as it seems intended to be listened to while you read. The others are character actors acting out the scenes you just finished reading and so don’t have the same scare effect since you already know what they say and what the outcome is. Nevertheless, still a nicety and it was the first eBook I’ve read with audio so that made it acceptable. Lastly, a short background on the creation of the story is also included as well as photos of the audio presentation cast and the author.

It’s nice to still find books you can read in one sitting and I have a feeling I might be re-visiting ‘Scratch’. A sequel titled ‘Abduction Hunter’ is mentioned to be in the works and I’m looking forward to checking it out.