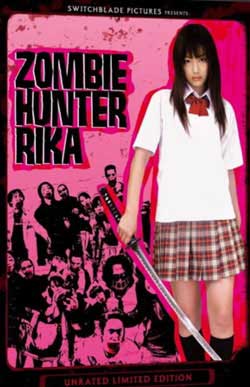 When high school student Rika is torn to shreds by zombies, her master-surgeon grandfather pieces her back together–into the ultimate zombie-killing badass chick. Now it’s on.

Which leads to what is probably the best and my favorite scene in the whole movie. Tomoya is with Sayaka in the backyard and they are talking about their deceitful plans when they start making out and getting all hot and heavy. While they are messing around Sayakas boobies fall out and the three maids are watching through a bathroom window. One of them comments on how her boobs are bigger than their employers and to prove it she whips her titties out. Then a second maid unleashes her jabberclackers to show that hers are even bigger and finally the last one, the one I thought was the cutest undoes her shirt but only shows her breasts still restrained by her brazier!

And hers were the ones I wanted to see the most! And then a zombie busts in on them and turns them into undead Japanese zombie maids. So all these zombies are attacking the house and it looks like the end is upon them when grandpa snaps out of his stupor and grabs his samurai sword off the wall and starts hacking, chopping, and generally taking these zombie f*cks apart. And in all the chaos one of the zombies takes a chunk out of Rikas arm! so grandpa chops it off at the shoulder! so you would kind of figure that Rika is going to turn into a zombie too, I mean I have seen alot of zombie movies and I can’t think of any zombie movie where someone gets bit and they do not turn into a ghoul. Is it okay to refer to a zombie as a ghoul? That’s what they call them in NIGHT OF THE LIVING DEAD and if it’s good enough for Romero, it should be good enough for you! Even after DIARY OF THE DEAD! But yeah, even when they do cut off the infected limb they usually still turn into a zombie.

Right after this the scientist that got bit in the very beginning shows up and even though he is zombified he tells them he wants to help them and will not eat them. He even has a face guard over his mouth so he won’t bite them. He tells them that there is this monster/creature called the Groarian ( they always come up with weird names for the monster in Japanese horror movies) and that if they can destroy this Groarian everyone that is a zombie will turn back to normal. Also there are these three bumbling stooges type characters that show up and I guess they are there for comic relief but one of them was watching this footage on his computer of this Caucasian zombie killer guy that is called….Zomber Hunter….and Zombie Hunter is fighting zombies but he gets killed by the Groarian and the Groarian rips his sword arm off and throws it up into the air where it continues to sail up, up, up towards the moon! And at first I thought this was a game this nerd was playing on his computer, or a movie he was watching, but I guess it was actual footage of Zombie Hunter fighting and getting killed by the zombies.

Confusing, but there are a few things that ZOMBIE HUNTER RIKA confused me with. Another thing I did not understand, well, I can totally go with the notion that Rikas grandfather cut off her arm and that Rika survives the trauma of losing a limb, I can accept that and I can accept the notion that Rikas grandfather is a surgical genius and could attach a new arm onto Rika, but what I didn’t catch is where her grandfather got the arm of the Zombie Hunter. I watched the scene again but I didn’t catch the part where he says where he got the arm. I saw it sailing towards the moon! How did he get it? I must of missed this part where he says where he got it….but I doubt it. And it tries to be funny like alot of zombie movies these days, maybe not all out comedy like SHAUN OF THE DEAD or ZOMBIELAND but it does have it’s humorous moments and for the most part they work. It never goes for the all out full on type of scares like in the Romero undead series or the Italian zombie movies, so don’t go into this expecting zombies shambling through a foggy graveyard through the moonlight with wolf howls in the background. Which is something I am starting to miss and I wish someone would make a zombie movie with everything I just described in it.

So the scientist says he knows where the zombie master is and if they can defeat him all will be well, and this is what I am getting at, is when they set out on their quest it is through the woods but it is during the day which pretty much neutralizes the scary zombie atmosphere. Another thing I did not like is that alot of the time when Rika uses her sword we see a flash of white light instead of a gush of blood or intestinal disgorgement. There is plenty of blood and gut spillage and limb chopping and a couple of good gore scenes but it is not at the level of MACHINE GIRL, TOKYO GORE POLICE, or MEATBALL MACHINE. Personally I don’t see why it could not of been like any of these, maybe the budget was that small where there was no way they could of had that much gore, but they were almost there. Just a couple of more gallons and 40 to 50 more feet of intestines.

Also the makeup for the zombies looks kind of cheap. I mean it is applied well but it looks like make up you would get at your local party city. By the way the zombies seem to be able to communicate with each other.
I did like the Groarian big zombie boss. He looked cool, not like some RESIDENT EVIL super zombie but like a white demonic wolfish type creature. Something that would of fit more in a supernatural samurai flick and he does have a final sword battle with Rika. I’ve read other reviews that complain that the fight scenes are lame and I guess they kind of are but they are not that bad, not to where it warranted complaint or ruined the movie for me. And then there is the end. I don’t want to give it away but it has a RETURN OF THE LIVING DEAD type ending so I guess I just did give it away but even this was confusing.

Overall, ZOMBIE HUNTER RIKA was a fun watch. It had just enough gore for me, it wasn’t boring but for a Japanese schoolgirl zombie comedy it is really a middle of the road affair and I would of much rather watched ROBOGEISHA, MUTANT GIRL SQUAD, GOTHIC AND LOLITA PSYCHO, FRANKENSTEIN GIRL VERSUS VAMPIRE GIRL, and even YAKUZA BUSTING GIRL. But then there are alot of other Japanese movies that are thirty six times more boring than ZOMBIE HUNTER RIKA. The NIGHTMARE DETECTIVE and SUICIDE SONG come to mind. Yuck! As for purchasing it, if it came loaded with extras and had a really cool cover and you are really into Japanese zombie movies it would be a hard DVD to resist buying. But I also read that it still has not received a U.S. release but I did see it on amazon but it looked like a cheap version or maybe even just a rip off. For completists only, casual fans can skip it and not feel like they missed something monumental.And I decided, Nami is the cuter one.