Now Penny is back and deadly as ever in the follow-up, “Scream! Scream, Little Sara!” which picks up six months after the first story left off. In it, we find Penny happily dismembering a lonely homeowner (Pam Drake) and scoffing at TV news reports of local police’s futile attempts to find her. But Penny isn’t quite alone—after disposing of the homeowner’s concerned nephew (co-producer Brian Schoof in a rare cameo appearance), she receives a telephone call from Gillian (Lauren Kole), a child she killed in the previous episode. Gillian’s words have a profound effect on Penny, who dons her clown garb that night to claim two lives for a very special cause at “The Midnight Hour.”

Principal photography has wrapped on the episode, which airs every Thursday and Saturday night in May, 2012. In addition to its offbeat script, the entry showcases the talents of its cast, one of the strongest in the series’ history.

Sharing the spotlight with star Mueller is Maggie Smith as Sara. Viewers will remember Maggie as the evil tot in season three’s “Don’t Look Under the Bed.” Here again she plays a difficult role with ease and surprising emotional depth. Supporting players Melissa O’Brien, last seen in the season three episode, “The Witch’s Candle,” returns as what may well be the meanest, bitchiest mom in TV history. Joining her in the dysfunction is newcomer Todd Moriarty in an equally fine turn as Sara’s surly father, Brad. Lauren Kole, last seen resting in pieces as Gillian in “Penny Pockets,” is back together again for an eerie appearance from beyond the grave. Pam Drake convincingly plays a dual role with aplomb while Hollywood veteran Ford (“Dahmer Vs. Gacy”) Austin makes a cameo as a TV news reporter.

“Directing good actors is a breeze,” says series creator Lee Martin. “They do half the work for you by making the right decisions before they ever step onto the set.”

Adding to the episode’s malevolent ambience is the moody noir-ish style of director of photography, Peter Fox. From start to finish, Fox’s frame is stylish and atmospheric, connoting money in a low-budget production. Excellent Midwest-based film editor Brian Schoof is also handling the slick visual effects and hardcore series fans should be delighted with the mayhem. Assistant director Meka Nelson and script supervisor Pam Wenzel kept the production rolling smoothly and filming did in fact wrap several hours early.

“Scream! Scream, Little Sara!” will air every Saturday and Thursday night throughout May, 2012. Visit www.leemartinsthemidnighthour.com for channels, times and a live streaming video simulcast link. 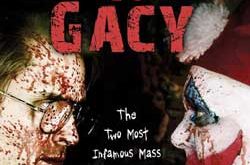