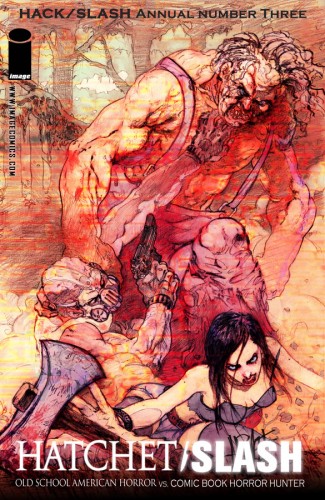 There was a movie I’ve seen called Hatchet, it was an homage to the horror movies of the eighties. In 2005 came a comic book sensation called Hack/Slash. A series devoted to all of those bad 80’s movies we grew up watching. The times where VHS movies were a big deal, how we would con our parents into letting us watch those slasher movies as they rented them for us. Hack/Slash is a series where it has everything, black humor, blood, gore, a hot chick kicking slasher ass with a baseball bat and with a hulking sidekick who wears a mask and carries to sharp blades with him.

There has been a crossover with these characters before.

They tangled with Chucky from the Child’s Play movies and now they go toe to toe with Victor Crowley from the Hatchet movies. The story is well written, it’s written to the point where this is dying to be made into a feature film.

Hatchet and Hatchet II are one of those movies that are low budget, they are not like Friday the 13th and A Nightmare on Elm Street. Since Hack/Slash was able to do a crossover with Child’s Play, fans have wanted to see our protagonists Cassie and Vlad go up agains Freddy and Jason. With such big name characters, that wasn’t going to happen anytime soon, with all the legal trouble and paperwork involved, the creators of Hack/Slash didn’t want to go through the hassle. So, the creator Tim met with Hatchet creator Adam Green and wanted to have Cassie tangle with Victor.

So, a long wait out of the way, the book is available in comic shops. It is 48 pages. There are some creative kills in this book. The art style itself is good and the dark colors matches the tone and atmosphere within the pages. The story itself has everything you ever wanted in a slasher story. We have the stereotypical characters that readers would just love to see ripped to pieces by Victor.

The events leading up to the big match with Cassie and Victor was well played out. Though, I felt more could be added to the story. If you’re curious about checking this title out, do so. The kills are good and well drawn. Ariel Zucker Brull is the artist behind the series. He’s put a lot of time and effort into the drawings. The guy has talent and if there is a horror book that needs an artist, he’s the one. Hatchet/Slash gets ten severed heads for an entertaining story.