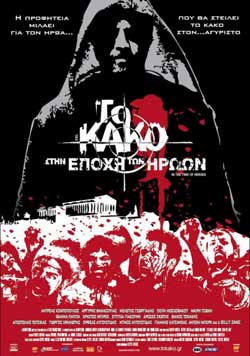 Also known as KAKO 2 (because using Roman numerals for a Greek movie is probably considered rude in some cultures? I dunno) this flick picks up right where the first KAKO (EVIL) left off; the survivors meet up with another group of barricaded survivors and have not only hungry Greek zombies to contend with but also other Greeks who have taken advantage of the situation and will shoot anything – living, dead, or undead, for their own selfish amusement and is if that weren’t enough, the pesky military is on the move and in the skies with enough bombs to level the country and only a few hours to get the hell outta town before the Big Baddda Booooom. In the midst of all this action, we also flashback to ancient Greece to learn just where the zombie apocalypse happened, how the ancient ones faced them down, and how the awesomely kickasstastic in any language Billy Fuckin’ Zane became a time traveling, zombie killing Monk On A Mission!!!! 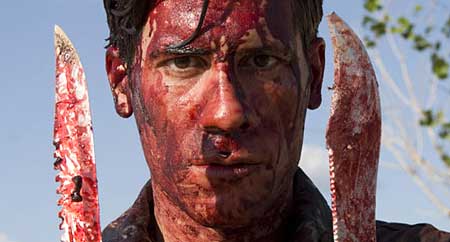 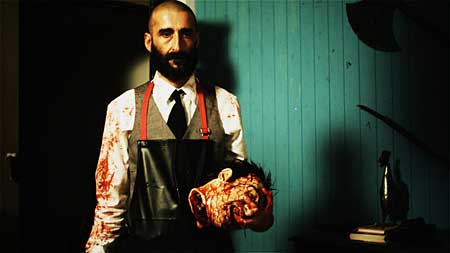 You might think from the way I talked in the opening that I have actually seen the first movie in this series. Negative, Ghost Rider, the pattern is full. Thankfully, there was a quick summation at the beginning of this one to help me along. And to be honest to the best of my knowledge, this is also the first time I’ve watched a Greek movie, unless you count MY BIG FAT GREEK WEDDING that I had to sit through on date night one time after losing a coin toss. Nah, I don’t count that one. NOOOO, I do not. 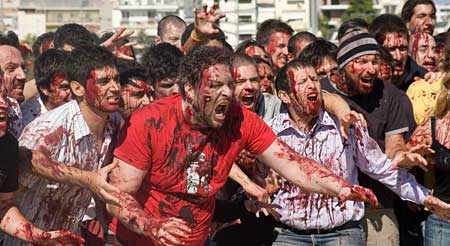 Anyway, the millions (AAAANNND MILLLLLIONS) of The Craig’s loyal readers will remember how I babylon and on and on and on about how the Brits have it nailed down tighter than Jill Wagner’s outfits on WIPEOUT when it comes to giving the world solidly-written, gory, blood-gushingly hilarious horror/comedies, and I still feel that way after all these years. Well, I may be wrong, I may be right, I may be crazy, but I totally believe with all my black, oozing heart that the creative team behind EVIL – IN THE TIME OF HEROES have taken their cues from jolly ole England when it came to constructing this story and filming it. 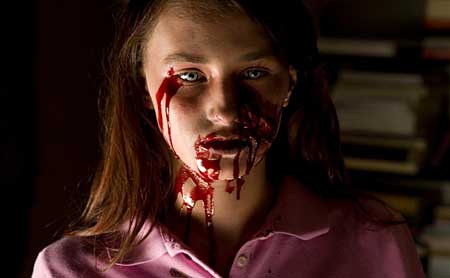 I don’t think since DOGHOUSE have I witnessed so much blood being flung around with such wide-eyed glee than I have here, and I can’t remember Billy Fuckin’ Zane kicking this much ass since DEMON KNIGHT, and my subtitle-reading jolly drunken ass was digging on every second of it!!! I wish his perfect psycho/comic timing could have been displayed here like it has in so many other movies (DEMON KNIGHT, THE MAD) instead of the silent Monk route, but this fan will take what he can get. 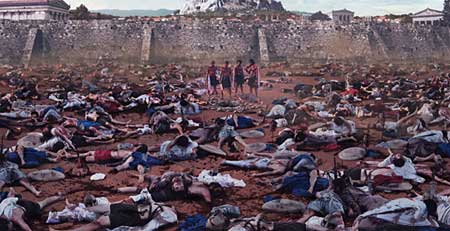 I can assure you that I in fact WILL be adding this movie to my collection, as well as the first one if I can find it. My only complaint is that growing up on horribly dubbed Godzilla and martial arts flicks from the 70s and earlier, I got spoiled and subtitles (which is all this screener offered me) do still grate on my nerves after all these years but hey, if that’s my only complaint, and it is, then that should tell you even though this flick is in fact a couple of years old already when it comes to when it was released overseas, that this is in fact THE zombie flick to beat so far this year. Don’t let this hilarious, blood-splattered Greek masterpiece get away from you!!