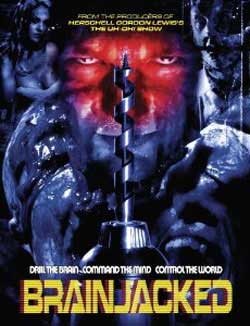 Tristan (Chris Jackson) is a runaway who suffers from terrible migraines. After being mugged he is hanging out on a park bench when he meets Laney, a nice, sweet (and kind of brainwashed) girl who tells him that she knows a place where he can stay. She also tells him that there is a doctor at this place who can help him with his headaches. Once this doctor performs surgery on Tristan (with a drill, no less) his migraines go away and he starts to feel better (and black out sporadically). Unfortunately it turns out that the doctor is quite out of his mind and is actually implanting devices into people’s brains so he can control them. Will Tristan be able to overcome the doctor’s mind control or will he be forced to live the rest of his life as a puppet?

Personally I have never really gotten into the whole science fiction thing. I like the “Star Wars” films OK but I am not fanatical about them like some people (so you would never see me dressed like Darth Vader as I waited in line for 4 months to be the first person to buy a ticket to see the re-re-re-re-re-release of “The Empire Strikes Back”). While “Brainjacked” isn’t a horrible movie it was a little too science fictiony for my taste. I think that the people who are more into science fiction flicks will appreciate it more than I did.

I’ve seen several movies that centered around mind control and the biggest majority of them were quite lousy. Knowing that “Brainjacked” was about an evil mind control plot I went into it with pretty low expectations. I will admit that it held my attention and was better than I thought it was going to be, but at the same time it isn’t going to be a movie that I watch over and over again.

There were some things that I did like about it. For one, it was pretty interesting for the most part and it was well-paced. There wasn’t a ton of non-stop action but there was usually something going on that kept me from getting bored. If you are looking for shoot outs, explosions, and high speed car chases you need to look elsewhere.

One of the strongest things that “Brainjacked” had going for it was its characters. Even though he does a lot of stupid things (like joining a cult, letting a guy drill a hole in his head, etc) I liked Tristan. I thought that Chris Jackson was good in the role and there was just something about the character that I can’t put my finger on that I liked. I dug Laney (Somali Rose) as well as she was just a cute, nice girl who is a perfect love interest for Tristan (plus she is pretty bad ass toward the end). Dr Karas (Rod Grant) was a pretty effective villain (I thought that he looked like a young Anthony Perkins and his voice sounded like Jon Cryer) who was creepy as well as a bit sleazy (and he had a drill for a hand! Rock on!). There was just something about Karas that was unsettling and I think that Rod Grant did a great job of playing the part.

On the flip side, there was one character that I just didn’t care for at all, and that was Zane (Christopher Sarlis). They carry on about him for most of the movie like he is some sort of badass or something but when he finally shows up he gets his ass kicked three times in a row. He pretty much just walks around using the same annoying voice Christian Bale uses when he’s playing Batman and doesn’t do a whole lot else. I was expecting him to be something special since Dr. Karas seems to be terrified and fascinated with him, but that just isn’t the case.

I’m really not sure what I thought about the ending. While I liked the fact that it has a pretty down ending (complete with some pretty cool gore) some of it didn’t make sense to me. Who is it typing commands on the computer? Is it Dr. Karas who somehow managed to survive or is it someone else? I don’t know and I guess the filmmakers didn’t either as we never find out.

“Brainjacked” was just so-so in my opinion. There really wasn’t anything original about it and it was just another science fiction flick with horror elements if you ask me. Like I said, I didn’t think that it was awful but it just wasn’t my cup of tea. Some people may absolutely love it but I had a little trouble getting into it personally. If you are into science fiction movies that deal with things such as mind control then I definitely recommend that you check it out. If you are like me though, and more into horror then I suggest you skip this one.