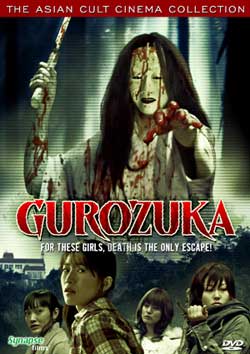 A college film club goes on a trip to an abandoned cabin to research a film. The two girls in the club aren’t alone however since they have also brought the drama club, a teacher chaperone and her suspected lover, a young girl who is the same age as the rest of the group. No one but the film club knows about the film that is being researched but soon they all will learn that someone is out there in the woods surrounding their cabin, and they want to recreate what they put on film so many years ago.

“It’s a fantasy where you are trying to lead us!”

Gurozuka is an interesting little import that has actually been around for quite some time but it is finally getting its release here in the states and is worth checking out if you want a new twist to your Asian horror. Although it does maintain the kind of atmosphere one is used to with this genre of film Gurozuka does something a little different, here we have an Asian slasher film!

A local university film club is planning a trip out to a remote cabin deep in the woods to research a “lost” film. The film club however just consists of Maki and Ai, the two girls are interested in a film that they have found. The film appears to be a snuff film showing a person in a mask killing another person all set to the tone of an ancient myth about a woman who gets possessed and then becomes a killer. The school of course will not let the film club go out on their own so they have also sent along a teacher named Ms. Yoko. Ms. Yoko is an interesting character as well since all of the students on the trip seem to believe that she is a lesbian. Ms. Yoko doesn’t help the situation when she brings another female student on the trip that is in the same classes as the rest of the group! There is also another club going along on the trip and they are the drama club, once again there are just three girls. The drama club is pretty much your mean girls, there is a leader who desires to be a star and her group of two admires. 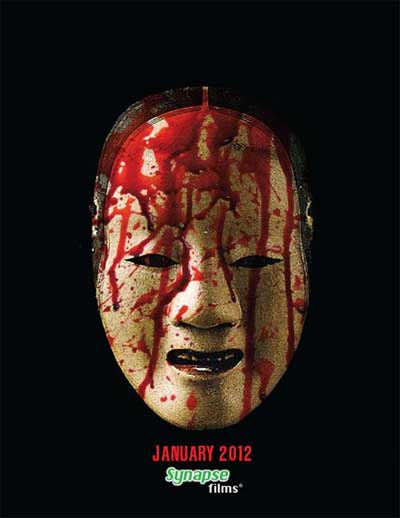 The film basically then proceeds to follow these cliques around as the atmosphere starts to thicken. The viewer is given a quick glimpse of the “snuff” film at the beginning of the film, however it is shown once again as the film group attempts to explain what they are working on. Maki has dug up some information about the film and has learned that the old film group from their school went to the very cabin they are in and began work on a film that left one dead and one put into the mental hospital, Maki believes that she has found that very footage they were working on. Ms. Yoko proceeds to get into a very loud and heated argument with her “date”. The drama club however spends most of their time gathering headshots for their leader who they hope one day becomes a star. 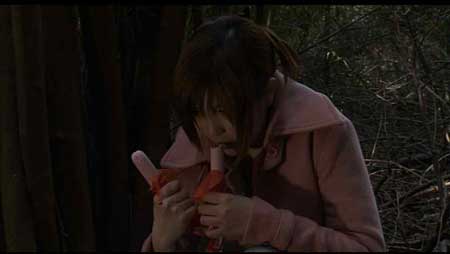 Things seem to move in order with the group until they wake up after the first night. All of the food that has been brought for the group is missing and of course everyone is a suspect, well except for the drama club because they are the ones who have brought the food along anyway. Of course accusations begin to fly as to who the food thief is, and if that isn’t bad enough now there is a person wearing a mask just like in the film knocking off the girl’s one at a time! 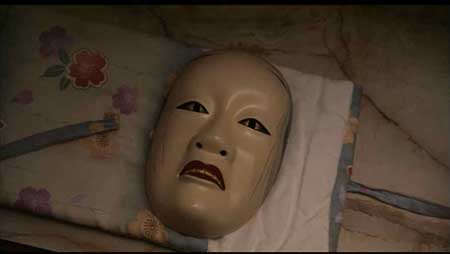 Gurozuka was a refreshing viewing experience, I just honestly can’t believe that it has taken this long for it to be released over stateside. Instead of relying on ghosts or other supernatural elements the film takes the body count route and succeeds in quite a few ways! Gorehounds however aren’t really going to care for this one since they will find its buildup too slow for not much of a payout, the deaths are far from graphic and instead of scaring you with blood and guts the film uses its atmosphere and several really well placed jump scenes to unnerve those who view it, I’m not going to lie one of the jump scenes did get me, and no I’m not going to tell you which one. 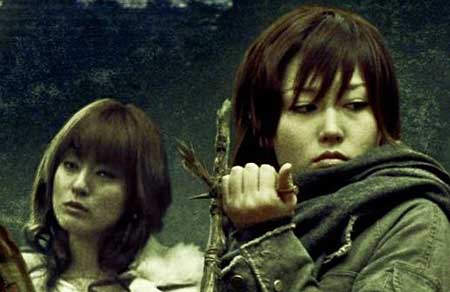 Go check out Gurozuka is you are a fan of atmospheric Asian horror or if you are just a fan of the slasher genre who wants to see something new.