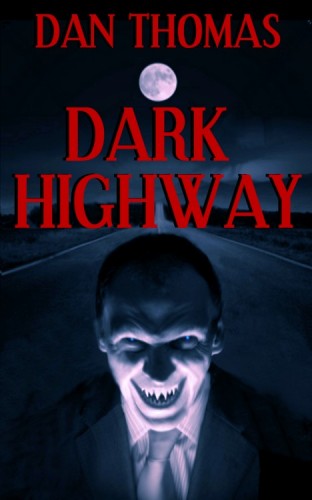 Sometimes life gets bad, then it gets even worse, then you die. Dark highway by Dan Thomas is a story about a man named Tom Turley whose life flows down a road littered with disappointment and grief. A salesman for a furnace company Tom can never seem to catch a break in life though all those motivational tapes he listens to tell him to “Make a miracle happen. You can do it!” “Say it till you believe it.”, but the deck of cards he has been dealt is filled with nothing but jokers.
Tom’s Journey begins when he arrives in Casper and his rental car breaks down on the highway.

From there he is forced to walk the rest the way into town. Along the way he spun around and thrown back into the road by a passing semi-truck where from there he is almost ran over by an RV. The caring people of the RV who almost ran him over offer him a ride into town. And from what I can tell Tom is not a big horror fan like the rest of us because as we all know you don’t get in the RV no matter how nice and caring the people may look like. And you guessed it the couple have some fun with Tom then leave him as another blood stain on the highway of life. But this is where thing start looking up for Tom as his corpse is highjack by aliens probed and then reanimated.

Dark Highway is a quirky zombie story that is remaniciant of a tales from the crypt episode. The story itself runs at a fairly fast pace and is a quick read. None of the characters are really fleshed out but this also seems to keep with the pacing of the story. But a little more would have been nice, for instance with the police officer that is hot on Toms trail. This character just seems like a throwaway character just put in to fill up space even though he shows up in the end to take care of business. Truthfully I didn’t care about him or his drive to solve the case. The author could have just left him at the whorehouse where we last spent time with him because I had already forgot about him by the time he popped back up again.

There is nothing deep or philosophical going on in this tale, so if that is what you’re looking for this is not the book for you. But if you’re looking for just a weird little tale and a few laughs and a lot of sex then this is the book for you. Yes I said sex, as much as Tom talks about, fantasizes about, and partakes in it you would think he would have become the first zombie p*rn star then where he actually ended up at the end of the story. So if you have some time to kill grab yourself a glass of milk, a pound of raw flesh, and a copy of Dark Highway to read.