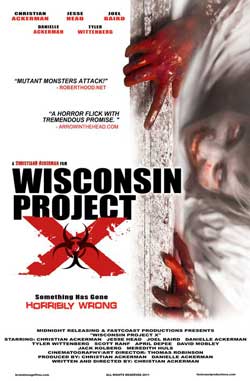 An experiment goes wrong at a local lab in Wisconsinville, Montana during the creation of artificial humanoid organisms. These man-made creatures break free from the lab and create chaos for everyone in the town. Now the small town underdogs have to save their home before it is too late

Best Line: “Hasta lambego, la taco enchilada….DIE”
Best line runner up: “…what we thought was going to be just a simple, routine solution to the process in the snack cake industry involving zero trans fat has really revolutionized how we think about domestic productivity through the creation of Bio-engineered Humanoid Artificial Organisms.”

I watched Apollo 18 with my lady last night and I learned something about myself. She’s not the biggest fan of horror movies, to say the least. She gets the willies in every movie I make her watch, right up until she figures out what it is in the movie she’s supposed to be afraid of; then she isn’t afraid anymore. In Apollo 18 (spoiler alert!) it was the rock spiders. Once she was aware that that was what she was dealing with she was fine. I find I have a similar way of enjoying the movies I get to review. I come into each one with a hopeful, yet skeptical attitude until I figure out the flavor of the movie. Wisconsin Project X is at its worst a low-budget zombie film, but at its best it has a wonderful sense of humor. 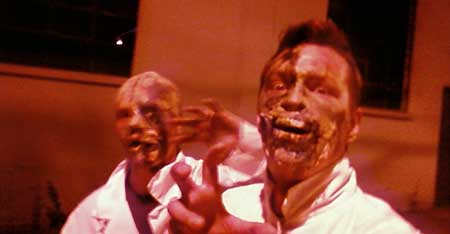 The elements that glared at me as being distracting in the movie I don’t believe were a result of the low budget, but rather technique. For instance, while the dialogue wasn’t bad it seemed poorly edited at times, mainly when switching camera angles or showing a phone conversation; there was a lag between lines of dialogue that undermined the dialogue itself. This didn’t happen too often, but enough to be a distraction. Also, the close-up shots were a bit much for me. That may be a bit of my personal taste coming through, but at times I wanted to back away from the screen for fear of that dude’s whiskers were going to poke me in the eye. 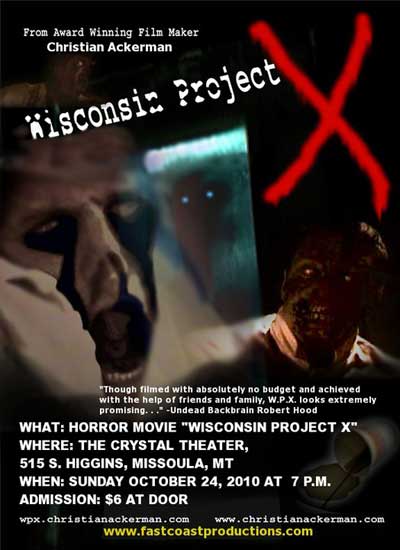 Overall though, there were some really interesting filmmaking techniques throughout the movie that I enjoyed. While the close-ups were a little much for me, I really like the skewed camera angles and the frequency of those 35 degree shots. It wasn’t over the top and it wasn’t something thrown in as a novelty. 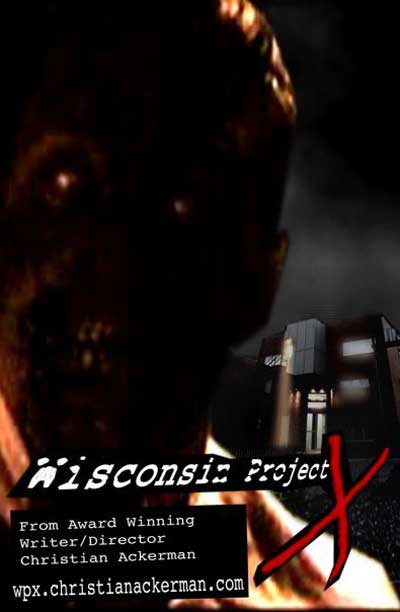 The zombie type things were fun. They were evenly dispersed between slow, lumbering dead and sprinting, pissed off dead. They all looked like they were at the beginning stages of the makeup development for Insane Clown Posse. They twitch magnificently. But the best part about them is how to kill them. Forget what you know about zombies. A shot to the head doesn’t work. Removing the head doesn’t work. Dismemberment sure as hell doesn’t work. What kills these humanoids? Coffee. In water pistols. Specifically, the coffee brand available that kills the creatures is called “Raimi’s”. And the Evil Dead homage doesn’t end there. There’s a small town cop who gets all bad-ass all of a sudden, a la Ash. One humanoid dead type thing he kills keeps popping back up into the frame just like Evil Ash did in Evil Dead 2. There’s even a moment when a severed hand wreaks havoc on our group of would-be heroes. (It’s worth mentioning that there’s a Romero reference as well when we see Night of the Living Dead on a television in what appears to be an abandoned house.) 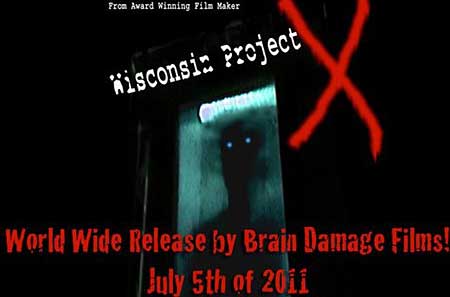 Wisconsin Project X is a ridiculous yet fun low budget movie. Now you know what to expect so enjoy it if that’s your cup of tea…or coffee, as the case may be.