Director Ridley Scott really seemed to be going out of his way to denounce all the reports that PROMETHEUS, his new epic sci-fi pic hitting theaters this summer had any connection what-so-ever to ALIEN, his 1979 tale of terror in space. A lot of us have been calling bullsh*t on this since the projects inception and it appears that we may have been right. The new still below just hit everyone’s inbox and I don’t care what you say, those are Space Jockeys in the background!! 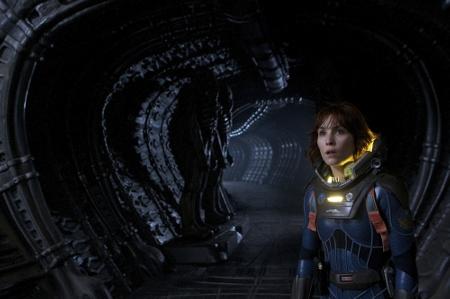 Regardless of what Director Scott tries to tell us, at the very least PROMETHEUS is set in a world very close to the world from ALIEN.

I don’t think we are looking at any type or prequel or new chapter int he ALIEN mythos but PROMETHEUS takes place in the same world as the ground breaking 1979 hit. In my opinion.

We’ll all see come June 8th when PROMETHEUS hits theaters and all will be revealed.