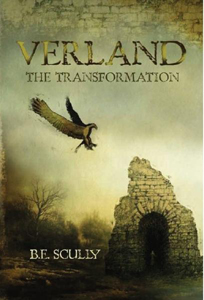 Verland: The Transformation by B.E. Scully

True crime writer Elle Bramasol is drawn into a macabre mystery when incarcerated Hollywood producer Eliot Kingman asks her to write a book about his case. As she delves deeper into Kingman’s murder conviction, she discovers that he possesses a centuries old diary written by an elusive vampire named Verland. Uncovering the transformative secrets held within the diary’s pages, Elle is drawn deeper into both Kingman’s deadly schemes and Verland’s dark world of shadows. When the two finally collide, the stage is set for a climactic battle over mankind’s ultimate prize: eternal triumph over death. But will the Holy Grail of immortality turn out to be
the cruelest curse of all?

I always approach a new vampire novel with a little trepidation. Those of you who are gracious enough to follow my reviews know I love vampires, hence the apprehension of starting a new vampire novel and finding out that if is just another in a long line of failed attempts.

My apprehension was put completely at rest after reading the first few pages of B.E. Scully’s “Verland: The Transformation”.  This is vampire fiction at its finest.

The story follows true crime writer Elle Bramasol as she is asked by Hollywood’s most notorious producer Eliot Kingman to write a book about his case. He is in prison for the murder of an assistant at his mansion.

Elle soon discovers that there is a lot more behind his story than just a simple murder. An ancient diary she is allowed to read draws her into a world that she never believed existed. Throughout the story Elle is torn between whether or not she really believes the diary or if it is just some ploy by Eliot Kingman. A really exquisite touch.

B.E. Scully pulls out all the stops with this book. From the subtle way he slowly reveals the vampiric aspect to the story, to Verland himself. He does a masterful job blending the two worlds together.

Part detective thriller, horror story and one man’s (vampire) journey through time, “Verland: The Transformation” shows that vampire fiction is far from dead in the hands of a great writer.

I don’t know if it was a homage to Bram Stoker’s original tale or not, but I especially loved how he used the diary to tell Verland’s tale.

“Verland: The Transformation has taken its place along side such modern vampire classics as Salem’s Lot, They Thirst, The Vampire Hunters, Lost Souls, Carrion Comfort and The Traveling Vampire Show, and also along side the granddaddy of them all Dracula. It is that good.

If you love vampire fiction this is one book you absolutely have to read and I give it my highest recommendation.