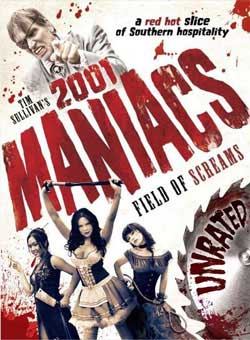 The vengeful ghosts from Pleasant Valley are back once again for their annual blood and guts jamboree, this year is a little different though since the local sheriff has decided to take it upon himself to stop the yearly bloodshed. After dealing with the local sheriff the only way that these maniacs know how they decide to take their jamboree on the road after all if the north wont come to the south maybe the south should go up to the north.

“Doomed us to a life in limbo, nothing more than ghosts seeking revenge.”

2001 Maniacs: Field of Screams starts off with a comic book style recap for those who haven’t seen the original H.G. Lewis 2000 Maniacs or the more recent Tim Sullivan update 2001 Maniacs. For those of you who don’t know the story it goes something like this, during the civil war the north invaded the town of Pleasant Valley then proceeded to rape and kill (even the children) the entire population (there is 2001 of them if you didn’t guess that). The residents of Pleasant Valley were turned into vengeful ghosts after the attack and now every year host a “blood and guts jamboree” in an effort to kill those evil folks from the north. You see the maniacs are being almost punished and they cannot even think about resting until all 2001 of their souls are avenged. After the story is told we are immediately rushed into the start of this year’s annual celebration.

2001 Maniacs is a great idea for a franchise because there are supposed to be so many of them that each film easily introduces more characters. This outing includes Kevin Ogilvie’s performance of Dr. Harper; Pleasant Valleys own Rhett Butler and several other new characters. The thing those who have seen 2001 Maniacs will instantly notice is that Robert Englund is not present in the role of Mayor George W. Buckland and instead the role has been taken over by Bill Moseley who I still honestly believe is one of the best character actors of the genre at this time.

It doesn’t take long for Tim Sullivan to get the ball rolling with this one, after the initial credit sequence in which the back story is told the viewer is immediately thrown right into the middle of the jamboree there is just one problem, there are no northerners anywhere in sight. The reason for the silence is solved when two of the maniacs bring the local sheriff into the middle of the celebration claiming that the sheriff has already began to take down their “detour” signs so their trap has been disabled. Buckland and company make short work of the sheriff by using a barrel full of nails that is rolled down a ramp; fans of the original are bound to get a chuckle out of that one. After the sheriff meets his fate the maniacs decide that its time for them to pack up a bus and head up north, Iowa to be exact.

What would a 2001 Maniacs film be without the victims though and it doesn’t take long for Tim Sullivan to introduce this year’s group of victims. Rome and Tina Sheridan are popular reality television stars with their show “Road Rascals”; it doesn’t take a rocket scientist to see where this is going. Rome and Tina star in their show with their boyfriends K-Jay and Falcon, there is also a crew involving a Hispanic production assistant, a Jewish director and a lesbian producer. The cast and crew are currently on the road and trying to enjoy the situation when the production assistant wrecks their RV due to a detour sign in the middle of the road. The group decides to simply stay the night and figure everything out in the morning. The next morning the girls wake up and find that the maniacs have also set up camp directly behind them and are more than eager to welcome them to this years “travelling jamboree”.

Tim Sullivan knows what he wants this time around, it isn’t quite the secret that the original 2001 Maniacs was hampered and heavily censored so with this one Tim got to make the movie he wanted to make. The film is funny, gory and exploitative…basically it’s everything you want to see: nudity, gore and a guy having sex with a stuffed goat…yeah. The death scenes are great involving an electric chair that burns out the victim’s eyeballs, a head is blown up, one guy is simply torn apart by a maniacs bare hands and of course people are shot and hit with all kinds of sharp objects. One of the more gruesome deaths involves a young lady who has a buzz saw literally run up the middle of her.

It isn’t all gore though; Tim Sullivan plays a lot on humor in this outing. For the most part there are no stereotypes that are kept sacred in this one, if you are easily offended by jokes like this you might wanna stay away from this one. The jokes just keep coming until what I believe is the peak when one of the victims is asking the maniacs when they will stop one of the maniacs replies “when pigs fly” and Dr. Harper replies “When we have a black man in the white house”. Obviously Mr. Sullivan likes to mix pop culture in with his humor and it is pretty funny.

2001 Maniacs: Field of Screams is exactly what you think it’s going to be and if that is your cup of tea, like it is mine, you are going to love every minute of it. However those who like their horror with a more serious tone aren’t going to care too much for this one….those of us however that are in on the joke already know….the south’s gonna rise again.