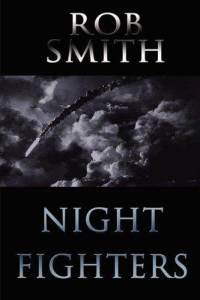 As I read the synopsis for Rob Smith’s Night Fighters, a mild wave of trepidation began to sink in. A battle between Nazis and vampire fighter pilots? It brought to mind campy B-movies lacking in substance and quality writing. I then began to wonder what I was even worrying about. Vampire stories set during WWII have been done well. Dan Simmons wrote of both vampires and Nazis in Carrion Comfort, which is regarded as one of his finest books. And while no one will admit to enjoying the film adaptations on an unironic level, the BloodRayne series of videogames also met with great acclaim. Smith mostly succeeds with Night Fighters, although some drawbacks prevent his effort from standing alongside Carrion Comfort and similar works.

September 1941. A German pilot known as the Vulture has caused great damage to the Royal Air Force’s Bomber Command unit. Quentin Quiet, a member of the shadowy K Department organization, proposes a plan to defeat the Vulture. K Department has formed a squadron of pilots who possess heightened reflexes and the ability to see in the dark. There is one potential problem: the condition allowing them such an ability requires them to feed on the blood of humans or animals. This group meets approval with the government, only to face several problems. Some of their peers look down upon them with disgust and fear, while their wing commander secretly plans to ensure the failure of K Department’s experiment. That’s not taking into account problems within the vampire squad. Crowe feels much anger at his vampire nature, while Raithe doesn’t have much use for his ordinary counterparts . . .

Absent from Night Fighters are the aristocratic immortals and ancient mysticism found in other vampire tales. Smith’s idea of vampirism is rooted in science, presented as a condition found since birth or later in life. A traditional approach wouldn’t have fit the novel’s tone and stripped-down feel. It’s a sensible choice on Smith’s part. Although I grew to care for most of the characters, there was only one who received major development. We first see Crowe as the reluctant hero who wants nothing to do with K Department. By the novel’s conclusion, he accepts and even grows to be proud of his newfound position. Even though the other characters aren’t as successfully realized, Smith does well in bringing to life the camaraderie between the pilots. His main strength, however, is composing the aerial combat sequences. The battles are written with a frenetic pace and include enough detail to make readers feel as if they are experiencing the events themselves.

Less successful is the use of the vampire as a metaphor for disenfranchised groups. Throughout the novel, the vampires are mocked and even threatened by those not afflicted with vampirism. It brings to mind stories of racism experienced by African-American soldiers who fought in WW2. The attempt to explore such issues is appreciated (I don’t think it’d make sense if Crowe and his fellow vamps immediately bonded with everyone), but it feels too obvious. I also didn’t feel alarmed by the Vulture. It’s difficult to feel anything over a character that’s only spoken of by others. Still, these flaws didn’t prevent me from enjoying Night Fighters. Smith’s debut is an entry into the vampire genre that doesn’t wallow in the cliches you’ll find in other novels. I look forward to more stories featuring K Department (indeed, a sequel is currently being written).