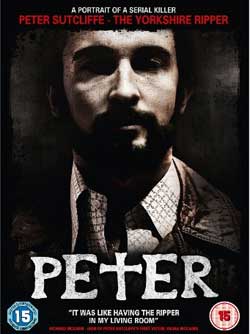 This film chronicles the horrific acts committed by Peter Sutcliffe, who was dubbed “The Yorkshire Ripper due to the fact that he brutally murdered over a dozen women and attacked several more during his reign of terror that started in the late sixties and ended in the early eighties. The movie combines actual news footage of the murders and interviews with police (and Sutcliffe’s father) with a dramatization of the events that has an actor portraying Peter.

Some people are fascinated by serial killers and are really into movies that are about them. Fortunately for those who are really into serial killer movies there are a ton of films to choose from. Some are great, some are good, and some are just plain bad. I think that Peter: Portrait of a Killer falls somewhere in the area between good and just OK. It wasn’t absolutely horrible and it wasn’t great either, and by the time it was over I thought that it was decent but I probably wouldn’t watch it again.

I was familiar with Sutcliffe’s story before I saw the movie and let’s just say that the man was pretty messed up in the head. The movie does a great job of showing just how nuts the guy was and Walt Kissack (who plays Peter in the dramatization clips) does an awesome job in the role. He is just creepy as Hell and he completely owns the role. As shown in the film, Peter thought that God was talking to him and telling him to kill people, and in my opinion it is people like this who are the scariest. There is nothing creepier than a scary religious person going around killing innocent people because he or she thinks that it is God’s will. One of the things that really works for this movie is that it does do a kickass job of showing how the actual Sutcliffe’s mind worked and his motivation for doing the things that he did. Trust me when I say this isn’t someone you want to meet in a dark alley one night as he is one creepy, messed up dude.

I liked the whole idea of combining actual news coverage and interviews with a dramatization and I’ll give the filmmakers props for trying something different, but it just didn’t quite work. I’m sure that the idea sounded great on paper and I’ll admit that there are times where it does work, but it also gets to be a bit annoying after a while due to the fact that it keeps flip flopping back and forth between actual footage and the dramatization. While both are interesting in their own way (personally I preferred seeing the news stories and interviews myself as I thought they were more involving) I can’t help but think that this should have been two different movies instead of one. The filmmakers should have utilized all of the news footage and interviews that they had access to to make an awesome documentary about the Yorkshire Ripper instead of going the route that they did. The dramatization was pretty good and the acting was top notch, but at the same time I found it to just be a distraction to the very intriguing interviews and other footage that was in the movie as well as I was more into them then I was anything else.

Peter: Portrait of a Killer wasn’t a bad movie, but I just think that it could have been better. I think that the filmmakers took a gamble by trying something new and original and while it works some of the time, it also fails some of the time as well. At times it is confusing and more than a little boring due to the fact that it keeps switching back and forth between the news footage and the dramatization and as I already said I really think that it should have been two different movies. Check it out if you are a fan of serial killer movies, you could do a lot worse.

Tags Peter Portrait of a Killer