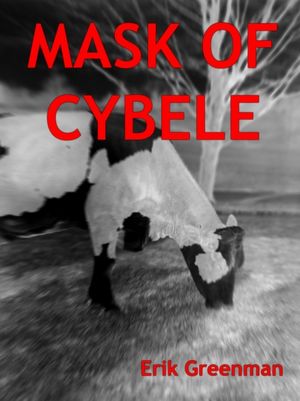 Mask of Cybele, the new novel by Erik Greenman, published as an e-book for multiple platforms, is the kind of book that gives self-publishing and POD books a bad name. It is tedious, boring, lacks a narrative drive and conflict, and is nothing short of a self-indulgent mess. It is the type of book that traditional publishers would shun, as it lacks the elements need to make it either a commercial or critical success, and to publish it would simply represent the pointless massacre of a hundred trees all to print thousands of surely-to-go-unsold copies.  In other words, publishing it would be a colossal waste of money and so in a normal world, the manuscript would otherwise be buried in a drawer in the writer’s den and in his memory, only to be remembered when the author plays a little game I like to call ‘what if?’

However, thanks to the world of POD and electronic publishing, the massacre can be avoided whilst the publishing cannot.  Hence, this review on a horror website for a book that, interestingly, is not a horror novel at all – unless you wish to count ‘horrifically dull’ as a new genre of horror.

At 65,000 words Mask of Cybele is by any stretch a fairly short novel in terms of actual verbiage employed – by comparison, Du Maurier’s Rebecca, which has no right being mentioned in the same breath as the work under review is 152,000 words – which makes it ironic that the novel is grossly overwritten.   Sadly, while I’m not smart enough to explain how something so short could be so long, I am smart enough to know that the book is completely interminable, reading as if it were three, and even four, times its actual length.  It goes without saying that, despite being the longer of the two novels, Rebecca reads like a breeze.

The story of the novel, or what story there is to it, concerns a pair of dull, grandstanding sociopaths – one of whom kept a dead rat as a child, petting it lovingly, the other who liked to paint in blood – who live on a dairy farm and engage in random weirdness, for no other reason than to do it.   In this case the weirdness includes fetishism and S&M, which makes the book sound far more exciting than it is.  Eventually, they check out of the weirdness, turning instead to speechifying about how they’d like to commit a crime, maybe by poisoning somebody, before going back to the weirdness.  More weirdness ensues, including grasshopper murder, until finally they meet a damaged woman, who makes their duo a trio, and goes along with their poisoning plot, only to eventually poison herself as well.  Sadly, the novel ends without the other two having poisoned themselves as well, a turn of events that would have greatly improved my overall impression of the work.

The sad truth of Mask of Cybele is that much of the book is pointless and beside the point and at least half the length could have been removed without injury to the already-threadbare plot, the obvious characters, or any other part of the story.  Of course, to lose half the book would take this from being a short novel to being a long short story, which I’m not sure is a fair punishment to heap on avid short-story readers.  Nevertheless, it’s the solution I would put forward.

Not that the novel doesn’t have many elements that should appeal to many readers.  There’s nudity galore, random sex, girl-on-girl action and S&M, and even a surreal quality running throughout.  However, having the right elements and deploying them properly are clearly two separate things.

Saying the novel has nudity galore is accurate, so much of it that it eventually moves beyond titillation and into distraction.  After all, if you lived every second of your life in a nudist society, eventually you’d get bored with seeing tits all day.  The same applies here.

Saying there is S&M is true, but not in the way that might bring in the casual reader.  No, this isn’t S&M with spankings and light-bondage and other things that nice middle-class couples do when they want to feel ‘naughty’.  No, this S&M includes eating garbage, a piece of jagged glass being inserted into a woman’s vagina, that same woman being digitally penetrated by a man wearing a hazmat suit, and another woman being bound with barbed wire.  On top of this a flashback of one of those women being molested by her father, who wants to pierce her vagina with a fishhook and the complete fetishization of everything in sight – in this case everything includes nails, lips, gloves, high heels, nudity, piercing, blood drinking, soiled panties, ritualistic cutting and branding.  Beyond those failures is the simple reality that nearly everything in the novel amounts to a failure.  The plot lacked any narrative drive to it and was largely conflict-free.  The characters were boring and unlikable and unrelateble.  The dialog was stilted, lacked authenticity, and the characters all spoke as theoretical people spoke, not how real people speak – it’s like reading a political screed as dialog.  (BTW, my favorite bit of dialog, for the wrong reasons, was: “You must promise to torture my flesh.  I’ll go insane if my skin is deprived of punishment.” Good god, who talks like this?)

Aside from these, though, the worst offense for me is the book is horribly overwritten.  Where one word would do, seven are used, and where a simple description would suffice, the writer goes overboard.  Reading the novel, I was left with the impression that this writer thought he wasn’t truly a writer until he’d thrown a hundred adjectives on every page and if that’s his impression, mission accomplished.  For instance, when the characters kiss, they don’t simply kiss.  No, rather, one “close[s] her green eyes, and their tongues swarmed in their mouths like snakes in a reptile womb.  She pulled her head back, and her tongue slithered over her teeth and into the dark cave of her smile.”  Independently, spread out, maybe these sorts of descriptions would be okay, but together, and constant, it was too much.

In short, if you want to waste your time on a story about weirdoes just sitting around being weirdoes, or having redundant, hallucinatory dreams about their weirdness, Mask of Cybele is for you.  I, however, am not a great fan of weirdness for weirdness sake,  and so would urge anybody who would consider reading this book to fight that urge – I already fell on that grenade for you, people, so there’s no need for two of us to be heroes.