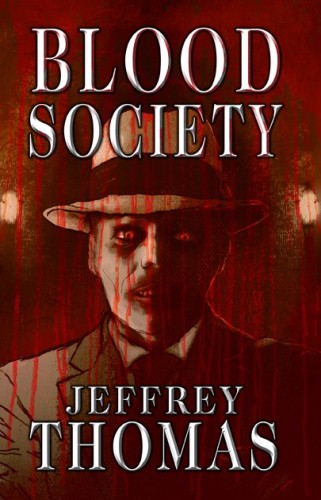 It’s tempting to start off with a trite rant about how defanged and bloodless vampire stories have become, but Blood Society isn’t really about vampires. I don’t just mean in the sense that we never truly know what protagonist Dragna and his ilk are; the monsters simply are not the focus. This is more of a traditional gangster story with the presence of vampires being used as a metaphor for the parasitic nature of the mafia. That’s where things get interesting.

Back in the early 1900’s, Attilio Augusta met a woman who turned him into something other than human: an immortal with the ability to transform into a hideous and ravenous beast. Unsure of what to do with his new unlife, he opts for following the family tradition of becoming a Mafioso. The rest of the book chronicles his life among Italian-American mobsters until his eventual reunion with the one who turned him and a run in with rivals like unto himself. Hijinks, blood and bodies ensue.

But Attilio (who goes by Dragna through most of the novel) is no Don Corleone. Sure, he runs his organization with a firm fist and isn’t afraid to shed some blood when he needs to, but he is also quite aware of the larger effect of his business activities. Throughout the novel, Dragna repeatedly reflects upon how he feeds upon society and the destruction his parasitism helps to wreck. The consequences of this follow him around like a shadow, destroying everything that matters to him. He’s keenly aware that what he does is harmful, and he is never truly at peace with that. All of this creates an interesting level of internal conflict within a type of tale that is usually too morally simplistic.

In addition to his treatment of the overarching gangster thrust of the story, Jeffery Thomas also does some amusing things with the vampire aspect. Right off the bat (yes, that pun was intentional), there is no question about the violent and predatory nature of beast. Sure, it wouldn’t be a Necro release without plenty of the red flowing and the central metaphor would be empty in its absence, but it was still refreshing to see vamps using their teeth for more than biting pillows in the midst of Mormon approved boning. Better, he toys with the traditional vamp tropes, warping them into a new being that may not even be vampire: the characters only know that they are super powered, immortal, blood drinking monstrosities that can switch between alternate realities. The name is the nearest approximation they can come up with to describe their situation. Which leads to the next cool point: none of the characters are magically aware of all of the rules and reasons of their condition. They’re just kids trying to figure out who and what they are while living from day to day.

Not all is sparkly, though. The cover art is a tad uninspired and bland, which isn’t a deal killer but is sad to see from a company I can usually depend on for high quality presentation. More pressingly, Dragna’s journey has no real arc to it. ***warning: minor vague spoilers may be present*** The end seems to point to a redemption through sacrifice but I don’t quite buy it, Dragna never seems to change in any fundamental way. ***End possible alert*** Of course, that may very well be the point of the metaphor of the nature of the mafia, but it struck me as cheap.

Overall, Blood Society messes with and blurs two mundane genres while making a clear social statement and coating the room red and chunky. Can’t see any reason to bitch there.