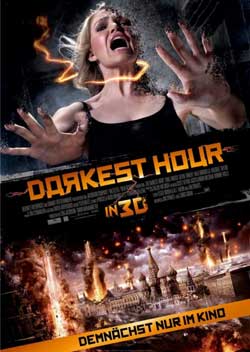 SYNOPSIS:
In Moscow, five young people lead the charge against an alien race who have attacked Earth via our power supply.

Lo & behold! I have emerged from my mausoleum to take in a movie that’s actually not geared towards the young folk! There’s been a lot of kiddie fare gracing the big screen as of late & The Black Saint has been bombarded by the likes of “Arthur Christmas” & “The Muppets”. It ain’t easy having a little one around who digs that stuff. But I finally found a reason to get out & see a movie that was geared towards me! Unfortunately, that movie turned out to be “The Darkest Hour”.

“The Darkest Hour” is about 2 pals (Sean & Ben) who are travelling to Russia to entice investors to fund a new social networking site. One that is a lot like Facebook. As soon as we meet them you know which one is the fun loving, carefree one (Sean) & the more serious, business like one (Ben). The stereotypical “Buddy” setup is in full effect here. When they arrive in Moscow & get to the office building where they are going to demonstrate their idea for a room full of wealthy investors they are shocked & surprised to find their friend, Skyler, already halfway through their presentation. He isn’t supposed to be there & says as much to them (In English. He’s speaking in Russian to the investors). He has in essence, co-opted their idea & is presenting it as his own. He has security escort the men off the premises, leaving their idea to him. 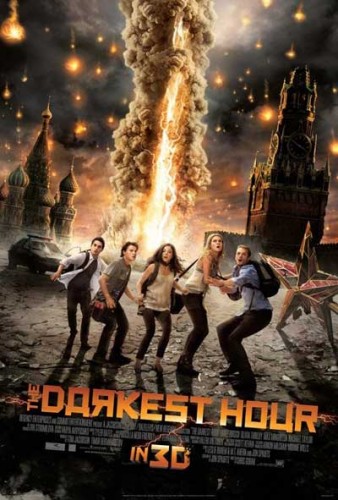 Rather than just wait for Skyler to come out of the building to beat the sh*t out of him as any rational human would do (I would. Wouldn’t you)? They decide to go clubbing & end up drowning their sorrows in a trendy bar where they meet up with Natalie & Anne. Two girls that Ben met while on the airplane using his new social networking site. The four meet & spend a bit of time engaging in silly word play & drinking. Skyler is also (Handily) present when they arrive and there is a bit of a confrontation between them with Skyler telling them that they cannot handle the Russians because they were too naive & not strong enough. Skyler thinks a lot of himself methinks. 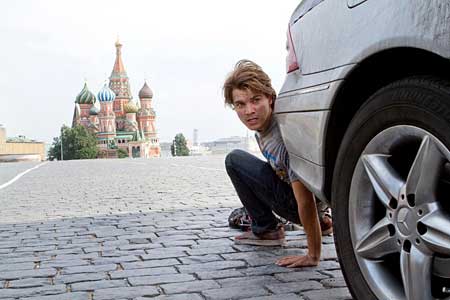 Right about then, Everybody notices some very ominous clouds overhead & all of the clubgoers go outside to investigate. What they find is a sky that looks a lot like the Aurora Borealis, waves of hypnotic color crossing the sky. Then all of a sudden Golden objects that look a lot like ornaments float down from the sky. The crowd is completely mesmerized…until they touch ground & proceed to turn invisible. But a stray dog & a curious policeman get too close and get disintegrated. This prompts everyone to run for their lives as the horde of invisible Christmas ornaments from outer space chase & disintegrate every living thing they touch. Of course, all five of the principle characters end up in the same little room and hole up in there for the weekend as all of Russia is seemingly eradicated by the aliens…

The rest of the plot I don’t have to recount because it’s all in the trailer. Which is sad but the norm when a studio doesn’t have faith in their product. So they pack the trailer with snippets of all the major scenes in there & hope to get a good weekend or two out of it before word of mouth & critics deliver a death blow to it. The best thing “TDH” has going for it is that it’s produced by Timur Bekmambetov (Night Watch, Day Watch) & the special effects are pretty good most of the time. Bekmambetov is obviously the driving force behind the film but his participation doesn’t necessarily guarantee a good film. So this leaves credited director Chris Gorak to be the recipient of the barbs that are definitely headed in his direction but might be better aimed at Bekmambetov. 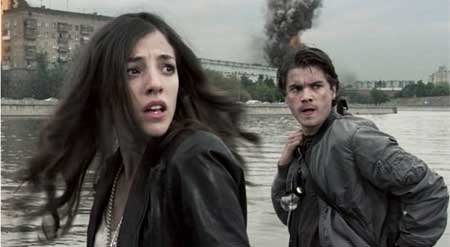 The biggest problem with “TDH” is that it’s simply stupid. Stupid to a very high degree in fact. It might be the stupidest film I’ve seen in a long time.
The script (By John Spaihts, who by the way co-wrote next year’s “Prometheus” which isn’t good news) is pedestrian at best. And there are numerous points in the script where it’s patently obvious he had no way of making believable so he just (Literally) threw stuff at the wall & see what stuck to it. One thing that I thought was interesting in the script was the way that seemingly nobody is safe from biting the big one. A lot of people die in this movie, some of whom you just know aren’t going to die. It was a nice change of pace from the norm used in these kinds of films. Hell, they even get a dog in the beginning. You rarely see a dog get it on the big screen. But Spaihts script & Gorak’s direction leave a whole lot of unanswerable questions, such as “How could 4 young adults survive against an invasion that has wiped out Russia in the space of a few days?” Actually I can answer that one: By adding ridiculously contrived plot devices to rescue them at nearly every turn in which the aliens have them cornered.

Did I mention it’s in 3D as well? The 3D didn’t help much but it didn’t hurt either. It was actually effective n a few scenes but just a few. The characters go through a lot of loss & pain as they meet up with some eccentric survivors. One who has figured out a way to keep the aliens away from him. All of Russia’s scientific might couldn’t stop em’ but a elderly man living in a small apartment can? Yeeah…that’s believable all right. “Microwave guns” are created, Submarines(!) are waiting, rebels are in hiding & the silly little ornaments from space are still looking for some strays. The script throws in nearly every hoary plot cliche that could fit & make a bit of sense but they fail on an epic scale. You’ll just have to see the ineptitude of the characters. 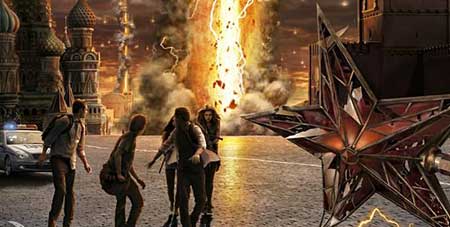 Emile Hirsch, Max Minghella, Rachel Taylor & Olivia Thirlby play the four protagonists & they all do a good job although Hirsch reminded me of what kind of child Sean Penn & Michael J. Fox might produce if men could get preggers. The special effects are servicable, the aliens look ridicuous (kinda like little angry red heads surrounded by a bunch of spinning Pretzels) though. Way too much CGI was used in the implementation of the aliens appearance & it doesn’t work. And the ending! Wow what a turd of an ending we have here. They just gave up on the film…plain & simple although it is left open for a sequel. Unless it’s premiering on SYFY as this one should’ve done, it ain’t gonna happen. 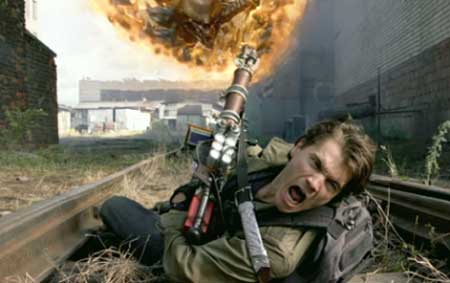 All in all, I can give “The Darkest Hour” One shroud. For some nice CGI environments & some nice sky effects as well. But is it worth your time? Hell to the no people! I take in these films to protect all of you, my acolytes, from spending your hard earned ducats on stuff like this. Avoid like the plague unless you enjoy suffering. They should’ve called it “The Darkest 89 minutes of your life” cuz that’s what it is. Honestly, Killer Christmas ornaments that are invisible? Wow Hollywood….just wow.