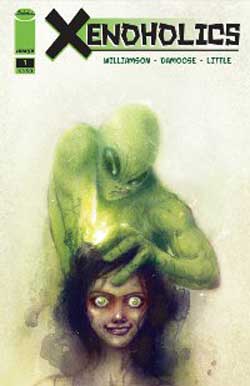 Because everyone thinks they’re a bunch of nutcases, a support group that claims aliens abducted them try to prove that aliens are real. But that’s much easier said than done and they find themselves caught up in not just ONE government conspiracy, but TWO. Oh, yeah and along the way they learn who is lying about being abducted? and who is telling the truth. “

“Are you addicted to aliens? Late night Encounters? Abductions? Probes? The XenoHolics are here to help!

Dying Breath: 4.5 out of 5
THE ALIENS ARE COMING! THE ALIENS ARE COMING! At least some people think so, and that is what leads me to check out Xenoholics by Williamson and Damoose. I have to admit I am a fan of Josh’s writing so this one was a no-brainer pick up for me. The story is full of mystery, jokes and great progression. I love the way that this issue started, giving the background on a specific member of the cast, and then leading into the group. Like I said there are great jokes here, but the story is also very entertaining on all levels, a solid read. I have seen Seth’s work before in the amazing Nightmare World books, so I am no stranger to what he brings to the table. What works here is Damoose’s style, which had a cartoonish feel to it that just lends to the story so perfectly. I loved the scenes where I saw the group at their homes. This team is setting down the foundation to what I know will be a great series. The writing is amazing, the concept is engaging and the art is the final nail in the coffin. This book is easily the newest member of my group of books that I call “Decapitated Dan’s books you need to read!”

If you would like to buy or know more about Xenoholics you can find it at www.imagecomics.com