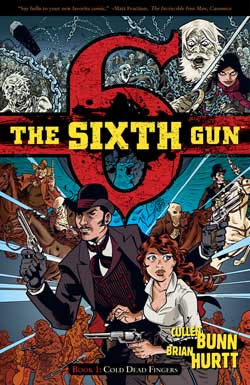 “Collecting issues #1 – #6 of the hit new series by Cullen Bunn and Brian Hurtt! During the darkest days of the Civil War, wicked cutthroats came into possession of six pistols of otherworldly power. In time, the Sixth Gun. the most dangerous of the weapons, vanished. When the gun surfaces in the hands of an innocent girl, dark forces reawaken. Vile men thought long dead set their sights on retrieving the gun and killing the girl. Only Drake Sinclair, a gunfighter with a shadowy past, stands in their way.”

Dying Breath: 4.5 out of 5
What is it with me lately? First I find a Sci-Fi book I like, then a Fantasy title peaks my interest and now I am in love with a Western(ish) story! The Sixth Gun takes everything I want to see in a Western, action, and mixes it with some elements of horror that I love, zombies and supernatural magic. The story is never dull in this collection. I know that because when I sat down to read it in pieces I finished the whole thing. Bunn does a fantastic job of weaving the elements together to bring a fascinating tale take place, and yet he still leaves so much mystery to this world. The artwork by Hurtt was GORE-Geous. I don’t think there was a single panel I didn’t want blown up to hang on the walls of my house. From his character designs to his interpretation of the story nothing seemed off. I feel bad for sleeping on this one for so long, because now I need to read the rest to catch up. I happen to know that a Mummy is in an upcoming story line so I need to get my neck moving! This book is one of the best being printed right now and should not be missed by anyone.

If you would like to buy or know more about The Sixth Gun you can find it at www.onipress.com