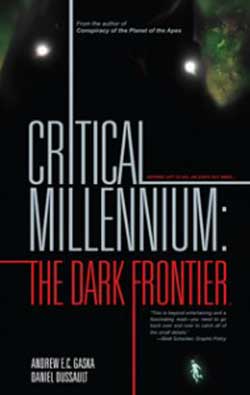 “Mankind’s rise and fall in space begins here! Two thousand years from now, the Earth is nearly dead. A bold group of explorers led by philanthropist Thomm Coney pushes forward to take the first tentative steps out of Earth’s solar system. Their quest: new worlds to colonize, so that humanity may yet have a chance at survival. Facing impossible odds, political agendas, and a fanatical terrorist regime bent on their destruction, Coney and his crew brave the dangers of a potentially volatile star drive in order to preserve a civilization intent not only on killing itself, but also on taking down every other living thing around it. Will mankind set aside its greed long enough to see a future amongst the stars? Collects Critical Millennium: The Dark Frontier #1-4 and contains extra material, including data sheets, sketchbook pages, starship information sheets and more.”

Dying Breath: 5.0 out of 5
Who would have thought a horror nut like me would fall in love with a Sci-Fi book like you? Critical Millennium is easily in this reviewer’s top 5 OGN’s/Trades of 2011. The artwork is nothing short of GORE-Geous on every single page. I talked about the panels in previous reviews, but being able to get so much art on a page that is covered in so much story is beyond me. The coloring has this colored pencil or charcoal look to it that makes it easily stand out in a crowd. I would honestly stare at these pages for hours, that way I could burn them into my retinas and stare at them all night long in my sleep. I do have on small issue though. With how great the artwork is, the dust jacket does not do this book any favors. The actual cover under the jacket is so much more appealing (but get the dust jacket for 2 awesome pull quotes anyways.) The story itself is just as on point as the artwork. For those who don’t know Drew Gaska also wrote Conspiracy of the Planet of the Apes, so he knows how to write long well written stories. That being said, you get one hell of a long story here. The amount of story goes back to me trying to figure out how they got all of this into 176 pages. It would take me 45 minutes to an hour to read one of the single issues! This book has more material than a quarter of the dictionary. I was hooked on this from page one and was so sad to see it end. While I do admit Space stories are not my cup of tea, a story like this has me easily second guessing myself. I can not recommend this book enough. It has everything I could have wanted in a story and soooooooooooo much more!

To find out more about Critical Millennium Hardcover please go to www.archaia.com/
and grab a copy at your local comic shop.